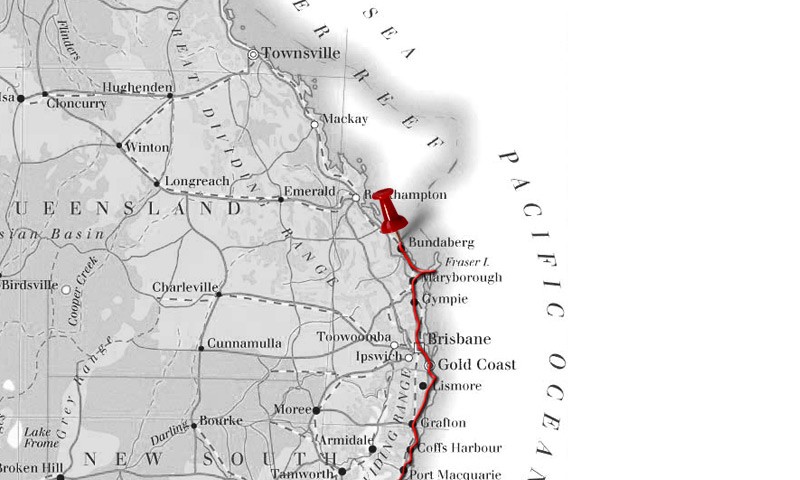 We left the campsite early this morning and headed off for the small village of Yandaran. The reason? It's where Ivette, an old work colleague of Sarah's, lives with her husband Ian. We had arranged to pop in and say hello and spend some time with them.

They live a short 30 minute drive from Bundaberg town centre in a small rural farming community. They have a fair size plot in which they grow a number of different fruits and nuts. Ivette is keen on starting an Alpaca farm and already has a few animals.

On arrival we were treated with a tasty lunch, including some really nice home made chutneys and pickles. We were made to feel at home. Ivette kindly arranged a tour of the Bundaberg Rum distillery and a turtle watching expedition at Mon Repos for us. Apparently these are the highlights of the Bundaberg region and it'd be blasphemy not to visit them. Ian kindly offered to drive us around for the day and point out other areas of interest.

First stop was the rum distillery near the town centre. Bundaberg grows sugar cane. Lots of sugar cane. More sugar cane than you can imagine. The output of which is sugar (duh!) and a bunch of side-products including molasses. These molasses are pumped to the distillery from the sugar mill directly through underground pipes. They are then stored onsite ready for use as and when required. We saw a 2 million litre capacity converted warehouse. It was absolutely massive and an incredible 4 metres deep. The sweet smell in the heat of the day was intoxicating. We had a taste of the dark syrupy substance and it tasted like treacle mixed with liquorice. It was a strong flavour that adhered itself to the palette. We were also shown various containers, vats and pipes and the whole process end-to-end. The finale was entrance to the exclusive onsite bar where you can enjoy all of the products made mere metres from where you are standing. I do like the odd sniff of Scotch now and then (10+ years single malts) and I do have to say that the silver label Bundaberg was getting close to the dryness and intensity of a good whiskey, just with a radically different flavour. The two free tastings were put to good use! No photos I'm afraid as you aren't allowed battery powered equipment in the distillery.

Next up was a drive to Hummock lookout for a lookout over the region. The views were pretty impressive and it was amazing to see just how flat the region is. It reminded me very strongly of The Netherlands. You can see why the area is used as farmland.

We then took a brief drive to Bargara beach for a look around and then a short stop at one of the local bars before heading off to Mon Repos for the turtle watching.

Mon Repos is world famous as being one of the few beaches in Australia where giant endangered sea turtles come to lay their eggs. The area is now classified as a conservation park and is closely monitored by scientists and local enthusiasts. All of the turtles are now listed as endangered species thanks to man's infringement on their lives. We arrived at 6:30pm sharp. It was a full 3 hour wait until our group was called to observe a turtle that had been spotted on the beach. Our turtle had dug a nest for her eggs and had begun to start laying before she got spooked, decided to call it a night and crawled back into the ocean. Unfortunately, it's not yet possible to schedule nature, but the organisation at the centre certainly needs improvement. No photos I'm afraid as you aren't allowed to use the flash and the group was the size of 3 rugby teams so visibility was hard.

After a busy day we returned to a home cooked lasagne and hit the sack quite tired.