One Hundred Away From Seventeen Seventy 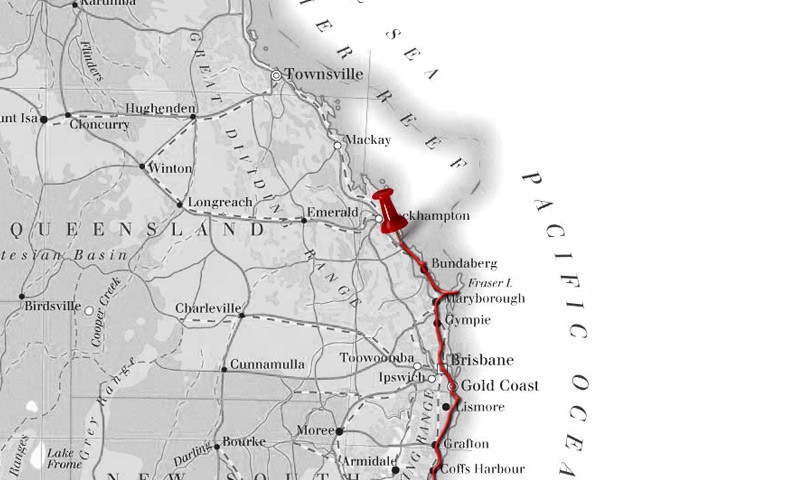 It was nice to have a bit of a lay-in this morning and not have to rush about to vacate by a certain time. Ian had planned breakfast at their local beach in Yandaran and had prepared some food. The beach was only about 10 minutes drive from their place and they also brought along their dog Zach for the ride.

I can understand why they choose to visit their local beach - they have it almost all to themselves. It's not in any way built up, and hasn't really been touched at all. The beach itself is fairly long, but not very wide. If you want to be by the sea and away from the masses, this is the place to go. We found a shady spot on the bank, and tucked into tea and bacon sandwiches. Even Zach polished off a cup of tea which was not surprising after the endless amount of running around he was doing in the blazing sun. I don't think I have seen a more energetic dog in my life - but he's very sweet and well trained.

After breakfast Ian drove us back to the house and it was time to pack up our things and continue our travels once more. Ivette took us up to their mailbox to show us their tree frog residents! Ivette and Ian have been great hosts and very generous, allowing us to take things easy for a day or so. Thanks guys!

We headed up towards Agnes Water first. Ian had mentioned that the beach there was lovely and he was right. We stopped at the beach and had a walk round to the rocks over the scalding hot sand. It's a really attractive beach. While the day seemed perfect there weren't really many people there at all. It's the time of year when you get stingers in the water - there were still people prepared to risk it (rather them than me!)

We headed further on to Seventeen Seventy for a brief look around. '1770' is named after the year that Captain Cook and his fleet arrived here. There were some nice lookouts over the ocean, and you could book day trips to see the southern most section of the Great Barrier Reef. We had originally planned to do one of these trips - to Lady Musgrave or Heron Island, but after speaking with Ivette she advised that the Reef becomes more colourful the further north you go. Therefore, we decided to leave our Great Barrier Reef experience until then.

Rockhampton seemed a little far to travel in one day, so we found a good campsite at Tannum Sands - which is on the way.

After nearly 2 weeks on the road now we are still really enjoying it. We've become used to living in our van now, and we like our routine of driving off in the morning, stopping at places along the way, and then finding a decent campsite to make dinner and sleep for the night. I think we could really get quite used to this!