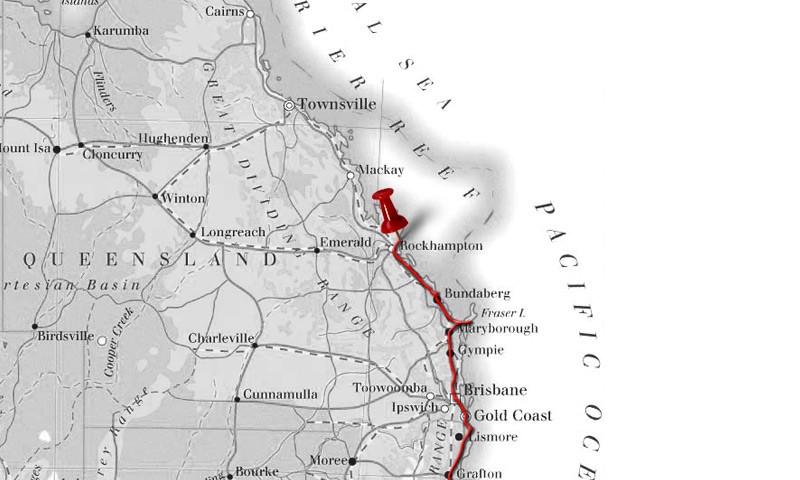 Today we drove up to Rockhampton. The scenery along the way was pretty amazing. We passed lots of mountains and beautiful countryside. We also spotted long freight trains carrying aluminium ore to the Rio Tinto refinery. They must transport thousands of tonnes of ore every day as we witnessed at least 3 trains within 20 minutes, each with 50+ loaded carts. Rockhampton was a fair distance from where we started this morning, but it was an enjoyable drive. On the way we crossed over the Tropic of Capricorn.

Back in the late 1800's Rockhampton was a gold-rush town. As a result of the incoming wealth the town full of majestic old buildings, including the Court House and old Post Office. Nowadays the region is famous for its beef production, and you'll find lots of bull statues dotted around the place. We found a shady spot by Mount Archer to make lunch and then decided to press on to the next destination.

The next places on our list to visit were several hundred kilometres away and without any known powered campsites en route. We therefore decided to head to a powered site in Yeppoon which is on the coast from Rockhampton.

There were some good lookouts along the way, including Wreck Point - where the same ship was wrecked twice in the space of a few years in the 1800's.

Once at the campsite we took advantage of the spare time to relax for a bit. Stu had downloaded a new version of Age of Empires III and gave that a go while I watched Back to the Future II on the television.

Today was very hot. Opening the window in the van is like putting yourself under a hair dryer!

We are looking at a day trip to Great Keppel Island tomorrow.