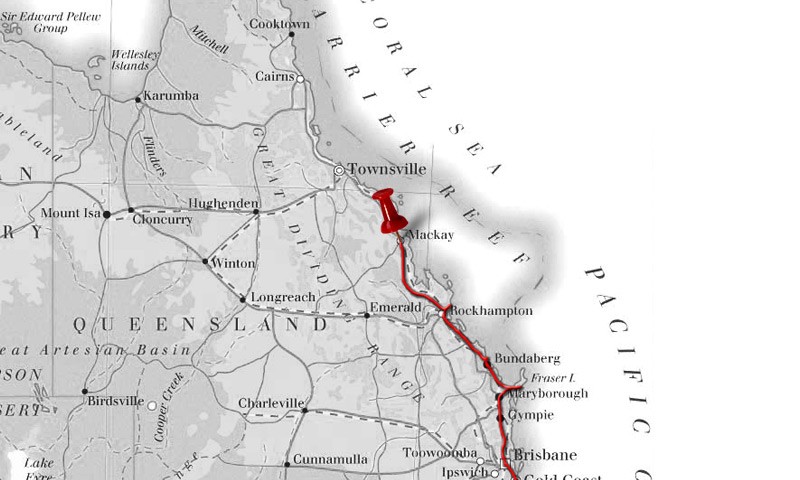 We decided against a day trip to Great Keppel Island today. I'm sure it's very nice, but as we toured Fraser Island a few days ago and we'll be doing the Whitsundays in a few days, we figured we'd give this one a miss. Before we left the area, we took a short drive to Emu Park to visit the Captain James Cook memorial. It's a ship constructed with musical pipes for sails, so as the wind blows through you hear a haunting tune - it's fairly effective!

From Emu Park, the next place on our itinerary, Sarina, was quite a distance away. The weather, while still warm, was turning pretty cloudy and it seemed rain was due. Today was probably the best day to be covering some distance in the van. The drive was very picturesque in places, and there were some huge mountains along the way.

By the time we were a few kilometres from Sarina the dark clouds started appearing over the mountains, and before we knew it the heavens opened. The rain fell harder and harder, to the point where we had to slow right down to see barely 10 metres ahead. I have never seen rain like it before. In fact it was beating down so hard we could hardly hear that the thunder had started aswell.

The stop in Sarina was brief. If the weather had been better, we may have taken a walk around town, but as it was we just stopped at the supermarket to get some supplies for dinner. We decided to press on to Mackay where our travel guide noted a decent campsite. On the way to Mackay, thankfully, the rain subsided, although the thunder storm continued for a while longer. Some of the cracks of lightening were clear to see and it felt as if they struck the earth not too far away. They were amazing!

Once settled at the campsite at Mackay, we thought we'd get dinner and have an early night - the driving must have taken it out of me today - I don't know what Stu's excuse was! Just as we were making up our bed the power cut out. Although our lights and fridge are battery powered, losing mains power meant that we lost the television and - more importantly - the air conditioning in the living area. The past few nights would have been unbearable in the van without it, so we weren't too happy. Thankfully today had been cooler than usual and it seemed we might be ok without it. A few hours later, in the early morning, we were both woken by the air conditioning and television blasting on at the same time - it seemed the mains power had returned!