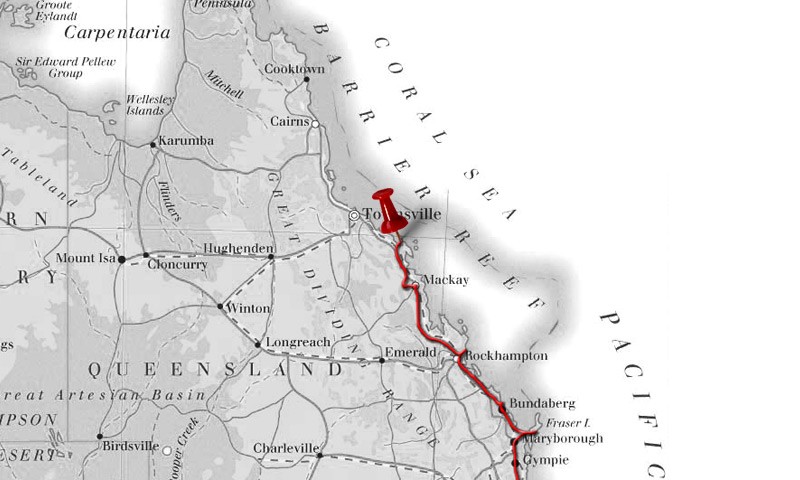 We decided to take a look around Mackay this morning before we left. A short drive around the town took us past a few nice old buildings. We also headed to the marina. You could drive right around the harbour, which offered some good views out to sea.

After leaving Mackay we headed to Eungella National Park, which took us more inland than further north up the coast. Our travel book advised this as a place well worth visiting, so we took the advice.

Thankfully, the advice was correct. It was a fair drive out to get to the park, around 80 kilometres out of our way, but it was really worth it. After you take the turning off the main highway towards the park, you can't help but feel you're in the middle of nowhere. The road takes you through the Pioneer Valley, with mountains on either side - a fantastic landscape.

Once you are within a few kilometres of the national park, there is a sign warning you of the steep ascent ahead (12%). Our van did not let us down, and it was a fairly easy approach to the summit. There were some amazing views out to the valley as we ascended. Suddenly, you come across a motel with a pub. The temptation of the pub seemed too good to resist, so we popped in for brief refreshment. The establishment had a outside area which overlooked part of the valley, so we took this spot as a great place to enjoy our cold drinks.

After our drinks, we headed onwards towards the 'Sky Window' lookout. It's a simple 200 metre loop which extends out from the car park. You walk through some forested area and then you are rewarded with the most amazing view - a clear vista down the centre of the Pioneer Valley, with mountains either side. Stu got some great pictures, but you can never capture how amazing these views are on a picture - though I reckon he's done a damn good job at it!

Moving onward from the lookout we headed to Broken River, which is supposedly a good place to view a platypus. However, the best times to see them are the winter months and usually first thing in the morning, or late afternoon/evening. We arrived around 1pm in the summer so there was no chance! We did have a good look, but didn't see one. We saw a lot of turtles and fish instead. After about 15 minutes of unsuccessful platypus hunting, we headed back to the van to grab some lunch, and then get back on the road to head to the next destination - Airlie Beach (gateway to the Whitsundays).

One of the other things to spot in this national park is the Ulysses butterfly, supposedly the most beautiful butterfly in the world (according to our book). I didn't see one, but Stu spotted one briefly as we were driving out of the park. Unfortunately, it was too brief to be able to capture on camera, but at least he saw one!