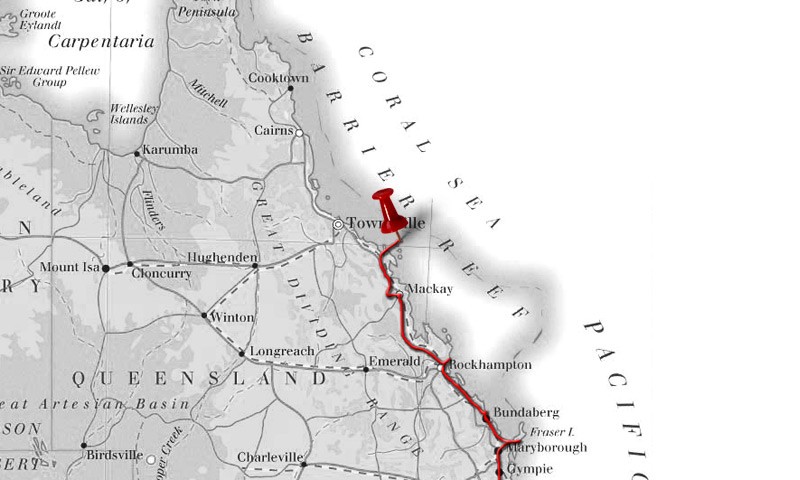 It was an early start this morning as we'd booked a day trip out to Knuckle Reef via the Whitsundays.

We were up at 6:30am and after a quick breakfast and shower made our way to be picked up for transfer to Airlie Beach. The company we booked with is called Cruise Whitsundays and the cost was a reasonable $199 AUD each. This includes transfer to/from your accommodation, a brief cruise through the Whitsunday islands, transfer to their pontoon at Knuckle Reef, use of snorkelling equipment, glass bottom boat rides, semi-sub rides and a buffet lunch. All in all, it's pretty good value! They do also offer scuba diving, helicopter rides and guided snorkelling. As an extra bonus we received a free day ticket for use on various ferries around the Whitsundays. We intend on using this tomorrow.

The cruise through the Whitsundays was very pleasant. We spotted a couple of islands to visit tomorrow with our day pass. The sea was reasonably calm and the sun was shining down. The journey from Airlie Beach to the outer reef, with a few pickups along the way, takes the best part of 3 hours. Quite a long time, but we were assured that the distance out would be well worth it. The ship we travelled on was well appointed with 3 decks, a bar, restrooms and plasma televisions playing video clips of the reef.

On arrival we donned our wetsuits and snorkel gear and jumped straight in. Wow. There were fish everywhere with beautiful coral formations some 2 metres below. The number of species of fish swimming around was mind boggling, I recognised a few from when my old man kept a tropical fish tank - yet here they are out in the wild! We also spotted a loggerhead turtle.

Following an hours snorkelling we dried off and attacked the buffet. The range of food was adequate incorporating everything you'd expect of a buffet.

Following lunch we decided on a glass bottom boat tour. The tour was ok, just nowhere near as good as snorkelling. By this time the tide had started to pick up and visibility started to diminish. It was a good thing that we were out earlier.

The semi-sub was better than the glass boat as you can sit in a sealed room submerged in the water. This is driven around in the water for you to take in the views. We were accompanied by a marine biologist who gave a commentary on the creatures passing the windows.

After the activities there was enough time to sit back and relax taking in some of the views of the reef before it was time to return to the mainland.

It's difficult to describe just how awe inspiring it is - suffice to say that it was well worth the the trip. We are both looking forward to our trips around the Whitsundays tomorrow. As you can imagine it's very difficult to take underwater pictures without the correct kit, so most of these photos are of the Whitsunday islands! Try Googling for images of Knuckle Reef to see for yourself.