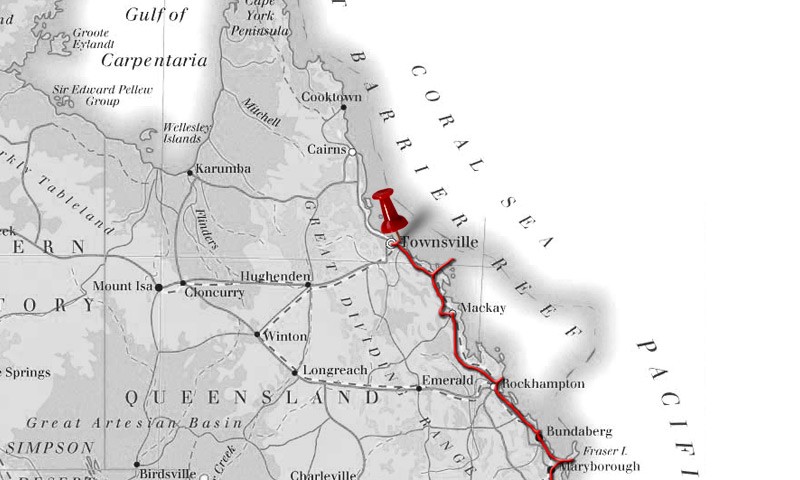 We headed to Castle Hill first thing this morning. This mount dominates the skyline in Townsville, with fantastic views over the town and out to Magnetic Island. It was a steep drive up, but nothing our trusty van couldn't handle. The views at the summit were fantastic, with lots of butterflies dancing in the breeze.

No trip to Townsville would be complete without a visit to Magnetic Island. We had originally planned on booking an afternoon on the island through a tour company. As it turned out the tour wasn't going ahead as no-one else had booked it. We therefore decided to take the ferry and head over ourselves. It actually worked out well as it was half the price and we could take the day at our own leisure.

Once on the island you can purchase a bus day pass for $6.20 AUD and then you are good to go. We travelled over to Picnic Bay, the next bay along from the ferry terminal at Nelly Bay.

We stopped at a cafe for lunch and then took a walk around, snapping some pictures along the way. After a short stroll we decided to grab the bus to the next bay, Horseshoe Bay. This was a lot like the other bay, only a bit bigger and with more shops and bars. We thought it would be nice to grab a few drinks in the nearest bar as despite the cloud it was still really hot and humid.

After some refreshment we decided to take a dip in the swimming section off the beach. The water was a warm 27 degrees, and offered some relief from the heat of the day. They have special netted areas that you can swim within. The nets protect you from the rather nasty jellyfish (stingers) that are in season at this time of year. The stings are apparently very painful and in some circumstances have caused death. This is something you really don't want to learn through trial and error!

After a pleasant day at Magnetic Island we headed back to Townsville on the ferry and chose to stay at the same camp site as we did last night. We grabbed a pizza on the way back as it was getting late, and settled in for the night with a film.