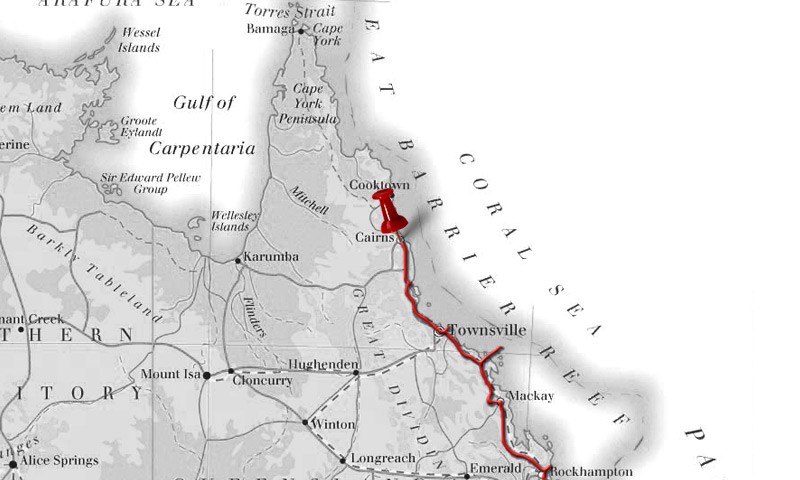 As we were leaving our campsite at Mission Beach this morning, Stu spotted a huge moth out on the lawn. When I first caught sight of it I thought it was a bat, but it was actually a Hercules moth - the largest in the world! So it was a quick dash back into the van for Stu so he could grab the camera and I could take a few shots with him holding it.

As we got into the drive, we noticed some black clouds overhead. No sooner had we seen them, than it started to rain. It seemed to rain harder as we continued. We saw a couple of turnings towards some waterfalls and national parks, but they didn't really appeal in this weather, so we continued onto Cairns.

Thankfully, as we approached Cairns the rain eased off, and we had some welcome sun. It was now incredibly hot!

We decided to park near the Esplanade and have a look around. There are no swimming beaches in Cairns because of the mudflats revealed at low tide, so the council built a 4000sqm pool for all to enjoy for free. It's staffed by lifeguards, has real sand and a number of barbeque and eating spots. It looked really inviting, but we wanted to see more of the area.

A walk further along the Esplanade took us towards Reef Hotel Casino. As well as being a hotel and casino, in the roof is a 20m high dome containing a walk-through rainforest. Our travel book recommended a visit so we gave it a go. It contains a wide variety of Australian wildlife - in fact around 60 species of rainforest creatures. There are numerous birds throughout the dome, lizards, a freshwater crocodile, pademelons (one of which had a young joey in her pouch), koalas and snakes. Fortunately, we'd arrived just at the start of a feeding tour, so we were given some interesting information about some of the creatures, and were able to watch them being fed. We even got to stroke a Tawny Frogmouth. The dome was an interesting place to visit, but I have to say it was a little on the expensive side.

Before making our way to a campsite, we decided on a wander around the shops. We bought a couple of games for my Nintendo DS, and Stu re-bought Age Of Empires III(!) and some new clothes.

Stu had noticed a campsite on our way into Cairns which billed itself as 'No.1 Tourist Park in Queensland' - so we thought it could be a winner. On arrival, it was reasonably priced, they had free wireless internet, a cafe, a pool - it seemed perfect. So we settled in for the night and Stu whipped up a chicken stir-fry for dinner. This was not easy given the size of the frying pan and hob, but he put in a good effort nonetheless!