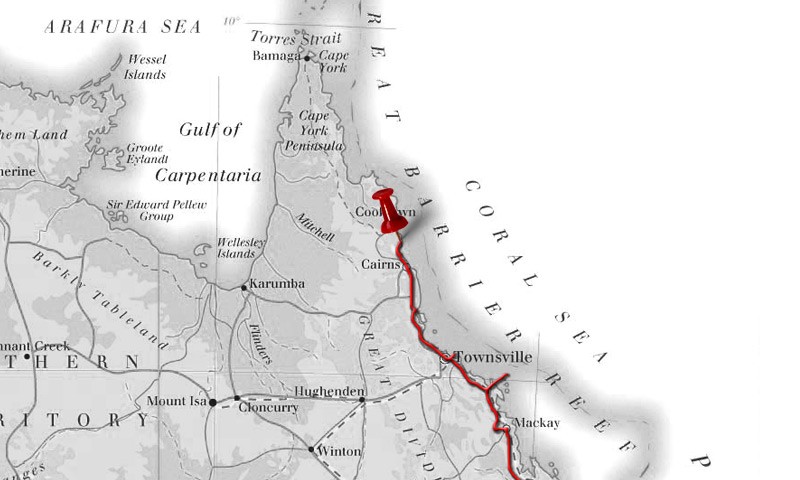 This morning we didn't have to make any breakfast, as the campsite provided pancakes free of charge by their pool area. We headed over and enjoyed a couple of pancakes and a cup of tea. They had a choice of maple syrup, lemon and sugar or honey toppings. The pancakes were delicious.

We left the campsite heading for Port Douglas. It was a nice drive up the coast. There were a few nice lookouts along the route - the best being the Rex Lookout. We were lucky today as we arrived just in time to watch a glider take off and float around on the coastal breeze - it looked like great fun.

Further along we came across the Mossman Gorge. This is a scenic area of National Park which has crystal clear water cascading over smooth granite boulders in the Mossman River. There were plenty of people there taking a swim in the river. We decided on a walk through the gorge and across the swing bridge which offered better views of the gorge without numerous kids screaming and shouting. It was an attractive area, and Stu managed to take some impressive time-lapse photos of the water.

Cape Tribulation was the decided destination for this evening, so we continued north. To get over to Cape Tribulation we had to take a small river ferry crossing. We decided against the campsite recommended in our travel book, and continued a little further through the area. We stopped at one part of the beach to take some pictures. Once again, some great views out to sea and of the hills of rainforest. Stu asked somebody's advice about campsites in the area, and he recommended a site about 15 minutes further along the road. We're glad we took his advice as the campsite was a rainforest hideaway, with a great pool. The campsite makes you feel like you're in the middle of the forest, and there is hardly anyone else here - so very peaceful too. Upon arrival, the first thing we did was get in the pool, and we had it all to ourselves. Not a bad way to spend Christmas Eve!