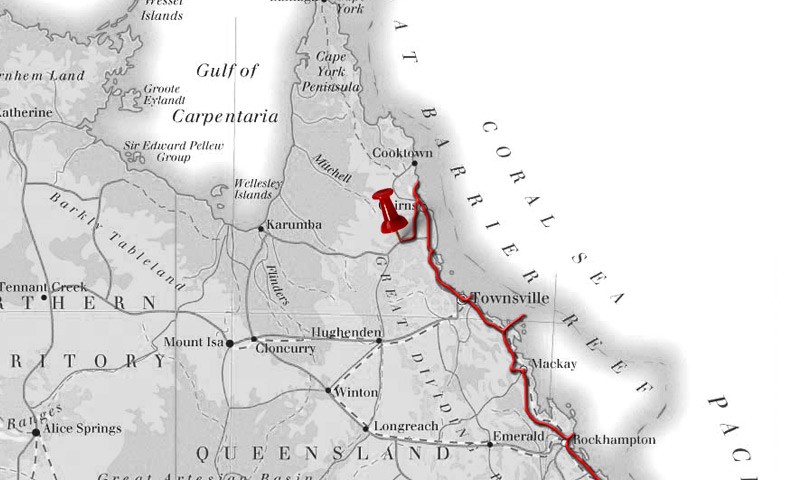 We had another pleasant lay-in this morning, well, it is Christmas after all! And whether by luck, or as a nice christmas present, the owners of the campsite didn't come round to collect any money for staying a second night. We are now thieves on the run!

Today was the first time in our trip that we stopped heading north. Although we haven't reached the most northern point of Queensland (that is still a thousand kilometres north of Cairns) going any further would require a 4WD vehicle. The road north beyond our campsite at Cape Tribulation is gravel for many kilometres, which is unsuitable for a motorhome. Plus, it is supposed to be the wet season (though we haven't seen much evidence of that yet) and the recommendation is not to travel to this area until May - October time.

We had to backtrack a little from Cape Tribulation, as the main highways going west are further south. We followed the main route back to Mossman, then turned off - instead of heading back to Cairns - and headed towards Atherton. Along the way we drove along some roads that were getting quite steep and winding. But they rewarded us near the top with a scenic lookout of the area below.

At Atherton there was little to see, but it seemed the nearest big town that was likely to have shops open on Boxing Day. When we arrived, we didn't bother actually going to the shops, as we knew we had enough food for dinner this evening, so decided that our Boxing Day lunch wouldn't be the traditional cold meats and pickles, but a quarter pounder with cheese, fries and a coke! You have to break with tradition sometimes! We're not proud of our lunch choice, but it was the quickest and easiest at the time, and meant we could get back on the road swiftly.

Just beyond Atherton is Mount Hypipamee National Park, which contains a volcanic crater and some attractive waterfalls, named Dinner Falls. We stopped here to take a look. It was a short boardwalk up to the Crater. It was pretty impressive - about 80m below water level too, according to the sign beside it. Stu took some pictures, but it was difficult to capture on the small picture displayed on our blog. The waterfall had two stages, and Stu captured some great time-lapse shots of them.

Heading further south from the National Park, we began to notice termite mounds at the side of the road. They continued along the roads for quite a few kilometres, many of them really big. Pretty amazing.

Stu picked Innot Hot Springs as a place to get a campsite for the night. On arrival we were informed of the free thermal pools within the site. Fantastic! So, at the first opportunity we decided to check them out. They had several pools of varying temperatures. There is the warm pool, which I liked the best. Then there was the hot pool - 45 degrees so we were told. It was amazing, but you could only stand it for a few minutes. Then there was the cool plunge pool - the perfect pool to end in as it cools you down perfectly. Some people would pay good money to use these facilities, so it's amazing this is free to use in the campsite. The thermal pools relaxed us both perfectly, and was a great end to our Boxing Day.