It's All A Little Dark 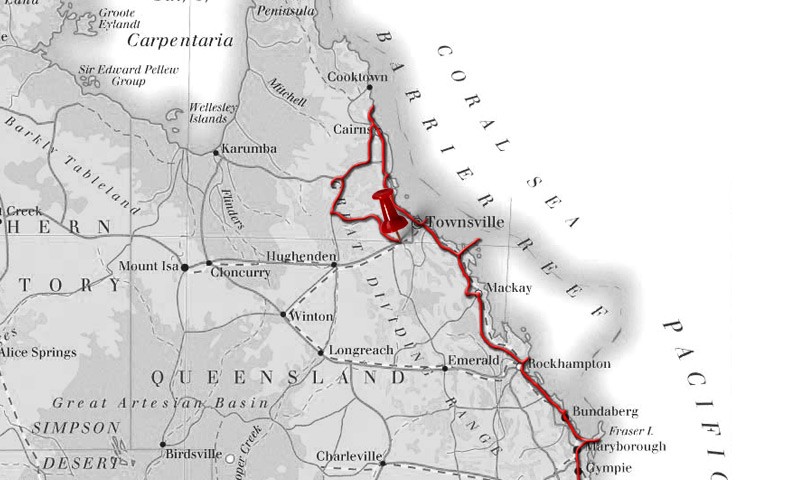 We started the day with another visit to the thermal pools. We then we set off towards Undara Volcanic National Park. The road which leads towards it is called the Gulf Developmental Road. Although this is a main road and sealed, in many places the tarmac is only wide enough for one vehicle. It has a basic dirt track either side if you need to move over for a passing vehicle. This isn't too much of a problem as there is hardly anyone using this road at all - which gives you a feel for how remote an area we were travelling towards. We pass someone once a hour or so. This road is also commonly used by road trains. These are huge trucks which haul long 53 metre long trailers. The road etiquette is, if you see a road train coming the other way, to indicate left, pull over onto the dirt track and let the road train have the tarmac - so they don't pelt you with stones more than anything. Not a vehicle to play chicken with!

Undara Volcanic National Park is the location of the longest lava tube cave system in the world. It was formed more than 190,000 years ago when a volcano erupted and tonnes of molten lava was spewed into the surrounding countryside. The lava bubbled along dry river beds forming a hard surface crust as it cooled, while the boiling lava continued to flow below - creating the hollow tubes as it drained away. These tubes weave throughout the land for around 150km, and a few of these lava tubes are accessable where the roof to the tube has collapsed. Some of these collapsed tubes are open to the public on guided tours. We had an hour or so to kill until the next available tour, so we took a walk up to Atkinson's Lookout. It was a longer walk than expected - it took up nearly all our spare time. But we were rewarded with a lookout over the savannah.

Once the tour began, we were taken by minibus to the location of the lava tubes. The tour guide we had certainly knew her stuff, and was full of interesting information about the geology of the area and the plant and wildlife. At the actual lava tubes, a boardwalk has been constructed to lead tourists easily below the ground level and into the first collapsed tube. The marks of the lava flow across the walls and ceilings of the tubes are fascinating, and it's amazing how cavernous they are. We were able to walk right into the tube and take some pictures. The second tube we were only allowed to look inside, but not venture any further. This is due to the atmospheric pressure being too high. This separates the oxygen from the carbon dioxide within the tube. The oxygen rises, while the carbon dioxide sinks to the bottom - therefore creating an area which would be difficult, if not impossible, to breath in. This was demonstrated by a tour member with a lighter which extinguished itself when descending into the tube. Thankfully, we could still see inside the tube to take pictures.

We found the tour really interesting, and you could not fault the tour guide at all. The lava tubes themselves were also amazing. The only slight downsize was the cost. It was $45 AUD each, which seemed pretty steep for what was actually provided. But still, a worthwhile visit.

After leaving the National Park we had to cover quite a bit of ground. We needed to make our way further south to get to the main highway heading west. We could use the Developmental Road to get west, but it would mean passing through areas of road which were slow, because of the road trains and the one-vehicle width road. We thought getting to the main highway, though a little bit of a backtrack, would work out quicker and more enjoyable to drive on in the long run.

The aim today was to make it as far as Charters Towers. From there we can get straight on the main highway west. At one point we noticed that our diesel level was running low, and we still had about 200 kilometres to go. Luckily we came across as petrol garage at a small village, and we also managed to get to a phone to call ahead to a campsite to make sure they would still be open to check us in when we arrived. With that all done, we continued on. Eventually we ended up driving behind a road train, which we thought at first would be a nightmare because it would slow us up. In fact, it ended up being a bit of luck as they travelled quite fast, and because they have right of way on the narrow parts of the road we were able to maintain a good speed behind it. If we didn't have him in front of us, we would have been a lot more aprehensive about getting any decent speed up.

We finally reached the campsite at Charters Towers around 7:30pm, and it was great to get here and take my eyes off the road for a while. The drive was good, but it's nice to have a break. At least we managed to cover the distance we wanted today. We didn't get a chance to stop at a shop to stock up on food (as there hasn't been any!) but luckily could rustle something up out of what we had. We shall sleep well tonight!