There Be Gold In Them Hills 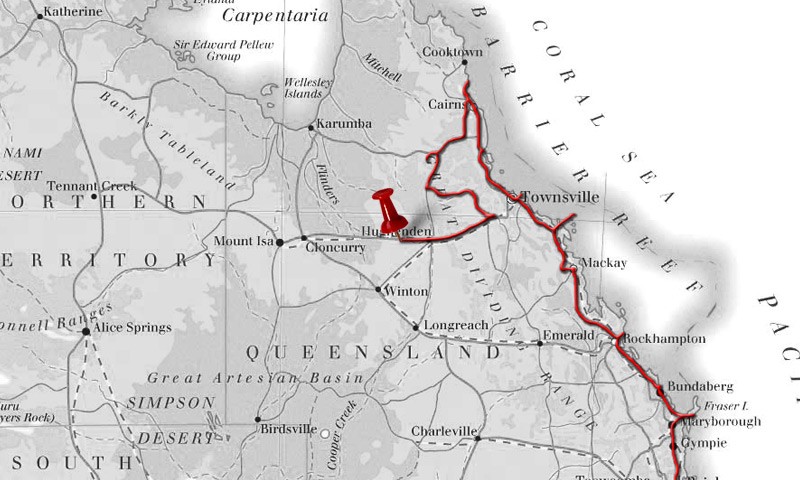 We decided to have a look around Charters Towers before me moved on, as we didn't get a chance when we arrived last night. The first place we wanted to visit was the Venus Gold Battery, located near the edge of town. When we arrived we were greeted by the tour guide, Claude, and shown around the mill. It was a really interesting tour, made more atmospheric by the fact that everything was left from the actual working mill, not recreations. It had the original stamping machines, grinders, sifting and amalgamation tables. There were even the original mercury (quicksilver) containers which were used in the gold extraction process. The tour was helped along with a couple of projected films, which helped to tell the story of the discovery of Gold here by Jupiter Mosman in 1872, and the subsequent building of the mill - which continued working until 1972 - 100 years of service!

After the tour, we drove into the centre of town and found a nice cafe for brunch - pancakes with ice cream, maple syrup and blueberry sauce (yummy!). Stu took a few pictures of some of the interesting looking buildings around the town. Then we stocked up on some food and fuel, and hit the Flinders Highway west.

We're glad we headed south to get on this main highway as the going was steady. The road is in much better condition than the Developmental Road, and fairly devoid of other travellers. It's nice to be able to plug our destination into the satellite navigation and know with a good deal of accuracy when we'll arrive.

We drove into Hughenden, but there was little that attracted us to stay very long. There was the large Dinosaur statue in the town centre which was worth a picture, but that was about it.

By the time we reached Richmond, time was getting on and we decided to take a campsite here. We wouldn't make it to the next big town before dark, so it was a good time to stop and camp. Our campsite is next to a large lake, where we saw a few people doing waterskiing early this evening. There was also a great sunset, which Stu took some amazing pictures of. Unfortunately, he only realised afterwards that he didn't have the memory card in his camera! Never mind the pictures; he's cooking my dinner tonight!

Today has been really warm, although cloudy at times, which has provided some relief from the direct sun. AS we've been driving we've seen some great storm clouds overhead, although we seem to have luckily made our way through them without encountering a storm directly over us. It has rained a little this evening, and we've seen some bolts of lightening some miles away, but nothing near us thankfully.