No Jokes About Big Bananas, Please. 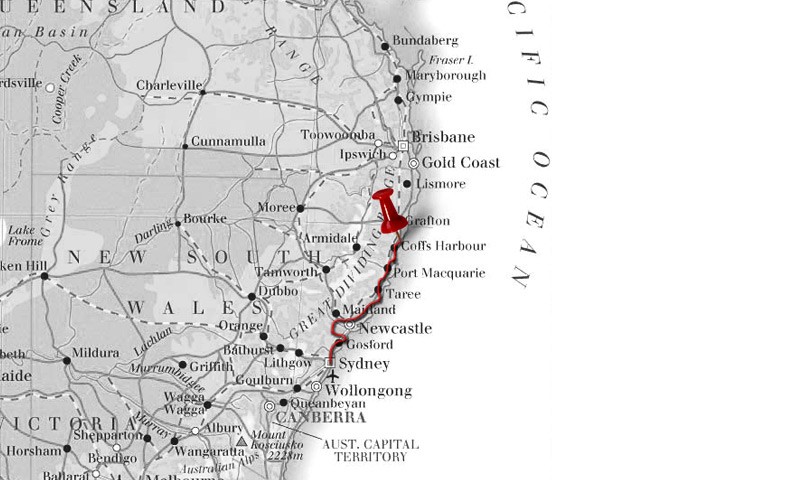 The day started hot and humid, and both increased throughout the day. We stopped briefly at the local Post Office by Hat Head National Park to check our e-mail, upload the blog etc, then continued on the road to Coffs Harbour.

The first place we headed to was Coffs Harbour jetty. We parked up and took a walk along the marina to Muttonbird Island Reserve. We walked up a steep path to a lookout point which had great views across the harbour and out to sea. Although it had turned rather cloudy and windy by this point, the humidity level was still very high - I don't think we stopped sweating all day (nice!).

No trip to Coffs Harbour would be complete without visiting 'The Big Banana'. This was created in order to boost the reputation of the banana industry in this area, and started off the Australian tradition of building large versions of points of interest in local towns. As well as being able to sample bananas in various forms, they also provide an indoor ski slope, tabogan ride, trike rides and more entertainment options. We thought a few pictures of the big banana itself and then a banana smoothie would do for us - then we continued on the Pacific Highway north.

We decided to stop at a place called Woolgoolga to get a motorhome pitch for the night. Just as we were driving into the area, some storm clouds unleashed a torrent of rain upon us. By the time we'd pulled into the campsite, parked up and connected the power etc, the bad weather had passed. We must have arrived after the worst of it as we noticed that a shop's roof across the road had collapsed in the high winds. A guy at our campsite told us the winds had got up to about 150mph, but just for a few minutes. The weather brightened up after that, and we had a lovely sunny evening.

After 5 days on the road, the time had come to do our first load of washing. Not very exciting, I know, but necessary. The ameneties here, like in all the campsites so far, are pretty good. There are lots of washing machines and driers, and they only cost a few dollars. Plus, they seem to do a better job than the washer and drier back in our flat in Freshwater! Stu said that he'd shared a shower with a baby fiddler crab!

As we were sitting outside our van this evening enjoying a few glasses of wine, an old guy who lives locally came up for a chat. A really friendly bloke. He was telling us that he and his wife had travelled round Australia for 5 years and clocked up 90,000 kilometers - and they still haven't seen the whole country! I darted off to sort out our washing, and when I returned he was still chatting to Stu. I think Stu got his entire life story. (When I turned up he was describing his last prostate exam!).