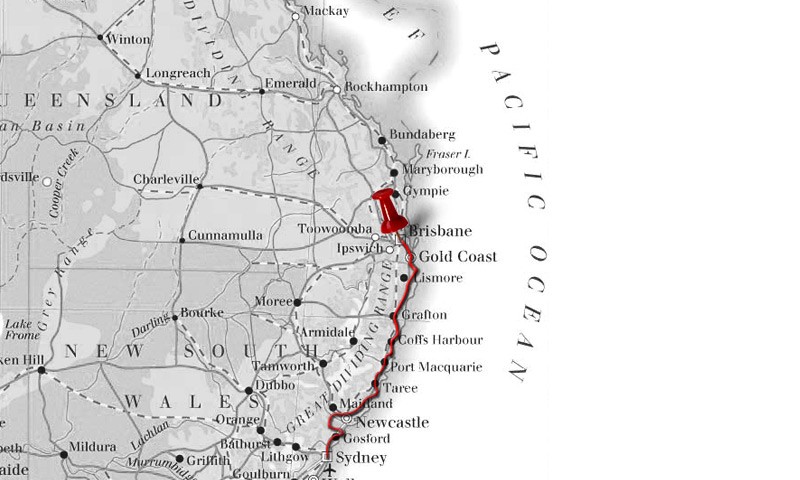 The storm had completely cleared when we awoke this morning, you couldn't really tell we had thunder and heavy rain last night. We woke up early so we could get ready to make our way to the city, and also so we could inform reception that we wanted to stay another night. It was only when we were up and about that we realised Queensland doesn't have daylight saving (as in NSW) so they are an hour behind - damn it! We could have had an extra hour in bed!

We got the bus at the top of the road and were able to buy return tickets (a new phenomenon after single-only tickets in Sydney). The bus took us all the way to South Bank - a recommended area to visit from our guide book.

My first impression of Brisbane city was that it reminded me a lot of the centre of London. Brisbane is known as the river city, so like London, it has a wide waterway running through the middle and tall office buildings built around it. It even has a big wheel on the river side like the London Eye (though not quite as big).

We took a stroll along the river, wandering pass cafes, bars, restaurants etc. We came across Streets Beach, which is a man-made beach they have built along the river side. It's pretty impressive as it has plenty of sand, clean water to swim in and lots of space for everyone. It's even got lifeguards and stalls selling ice-creams and drinks. Puts Bristol's pathetic city beach idea completely to shame!

We eventually stopped at an Italian restaurant to grab some lunch and some much needed refreshment. Temperatures were supposedly 34 degrees today in the city - and it felt like it! After lunch we headed back up the river, and then took one of the bridges into the centre. This took us past the shops and on towards the Botanic Gardens. A guy approached Stu asking if we were heading to the gardens, which we were. He advised Stu that there was a Baptist Church concert going on in the park today.

Although the concert was going on in one area of the park, thankfully the gardens were big enough to enjoy without being subjected to too much god bothering. The gardens themselves were very nice, and there was lots of wildlife - we even spotted a couple of big lizards along the way.

The heat did get too much after a while. There's no escaping it in the city, unlike when you're at the coast and you get a nice coastal breeze. So we decided to make our way back through the city to the bus stop.

Once back at the campsite, we both took a much needed second shower of the day. I think it's the first time I've ever taken a shower with only the cold tap running. It was fantastic!

Tonight was yet another storm, and some very impressive thunder bolts could be seen. Thankfully, the last few storms have only happened at night so we can't really complain when we are dry and cosy in our motorhome. I feel a little sorry for the travellers in the smaller campervans - muhaha!