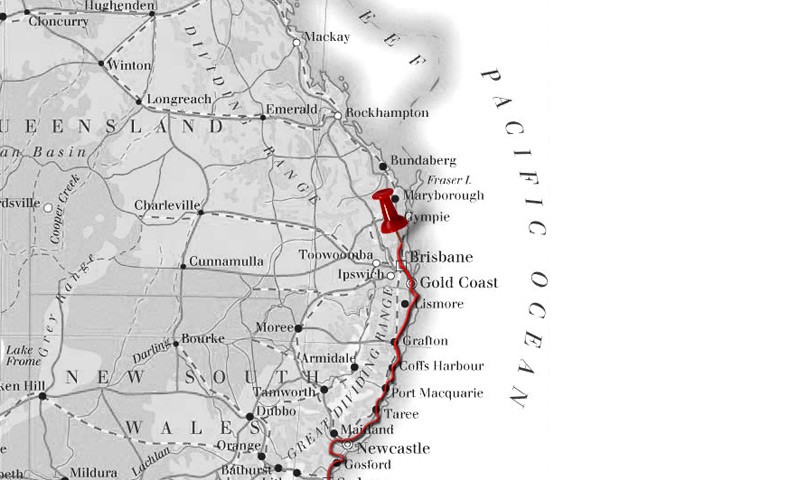 After going to bed last night the thunder storm really kicked off. The rain also thundered down for the best part of the night. However, by the morning it was clear once again and the sun was shining. It was a very bright, hot and sunny start to the day.

We left Brisbane for the Glasshouse Mountains National Park. Taking the tourist drive off the main highway going North we first stopped at the Mount Beerburrum lookout. We thought it might just be something up to drive to and park up, but it was a 700m pathway to follow. We thought it should be OK even though the day had really heated up at this point. Even after the first few steps we realised this was going to be a mammoth task - but we persevered. The path was much steeper than we originally thought, and the humidity and heat grew more intense. We had to stop every now and then just to catch our breath. Just when we thought we couldn't walk any further, we saw the lookout platform at the top. I have to say, the view was pretty amazing and thankfully, worth the tough walk. It offered a fantastic view of the national park, out towards Mounts Coonowrin, Ngungun, Beerwah and of course Beerburrum.

Whilst the view was distracting we knew the journey back down the Mount awaited us. We had forgotten to bring the insect repellent and were getting bitten everywhere. Some of the march flies bit hard enough to draw blood - they are affectionately referred to as 'teeth with wings'. We were nearly wet through with perspiration (so much for Sure's advertising!). Once we made it to the bottom Stu immediately took off his t-shirt and was able to wring it out (nice!) This is where our tiny shower in the motor home came in handy. Stu had a very welcome wash and change of clothes. All this after a measly 1.4km roundtrip!

We carried on through the National Park towards the Glasshouse Mountains lookout. Thankfully at this one you could just drive up and take your pictures nice and easily. It probably wasn't quite as fantastic as the previous lookout but nevertheless we were rewarded with another viewpoint out towards the mountains.

Australia Zoo - as made famous by the late Steve Irwin - was our next stop. Whilst the entry fee was a little steep ($106 AUD for the two of us) it was well worth the visit. There is a vast amount of space within the zoo itself so the inmates all have plenty of room to roam. We watched a show of crocodiles being fed, entered the 'roo heaven' enclosure for some close-ups of the kangaroos and wallabies. We watched the koalas in the trees (one of whom had a little baby which was so cute!), elephants, a beautiful Bengal tiger and many more amazing creatures. There were endless pictures and films of Steve Irwin being played around the park. His presence is still very much felt in the zoo, and he is obviously greatly missed by all.

We stayed at the park till closing and decided it was best to find a campsite not too far away to settle for the night. About 3 kilometres up the road from the zoo was a campsite in Landsborough. A nice little place with hundreds of parrots in the trees making quite a racket!

(Stu: Note to self: don't attempt a 700m near-vertical climb in 34 degree heat, high 70's humidity with a 15Kg camera backpack. It might not be comfortable!)