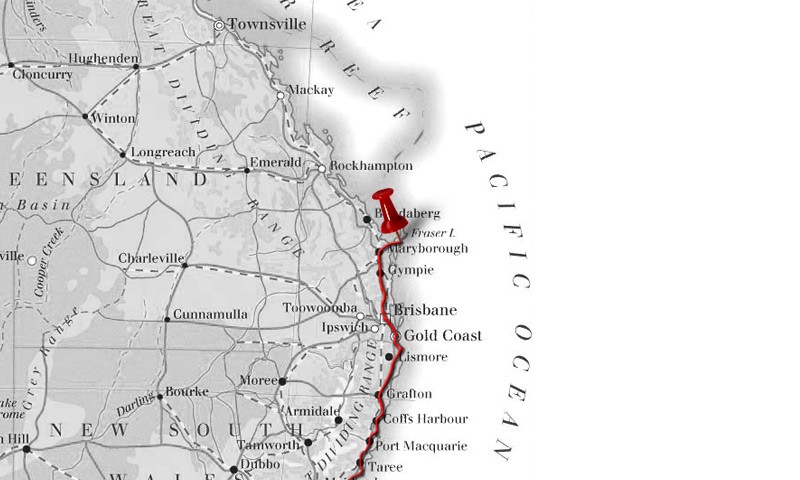 The pickup time for our trip to Fraser Island today was 7:55am, so it was an extra early start for us this morning. Still, having an ensuite shower and toilet at the campsite worked out well. The tour guide who picked us up was a German guy called Henning - he was hilarious. He had the funniest way of talking, and a very quirky sense of humour. He drove us and the 13 other passengers on our tour to the harbour so we could catch the vehicular ferry over to Fraser Island.

The ferry was to take 55 minutes, so it was a chance to sit back and relax as we slowly made our way across the calm waters to the island. The weather couldn't have turned out any better - the sun was shining and it was a lovely hot day. There was a great coastal breeze and no noticeable humidity.

The first stage of the tour was a drive through the rainforest. Because the whole island is sand, the track which the minibus drives along is quite worn through heavy use. I didn't realise quite how 'off road' the drive would be, but have to say it was really enjoyable despite being quite bumpy. We took a brief stop in the rainforest so we could get out and have a quick walk and take some photos. Then it was back on the bus to take us to the Happy Valley cafe for some morning refreshments.

The cafe had already set out coffee, tea and cakes for us all. It seemed quite weird driving through dense rainforest and then reaching a large modern cafe with satellite television. The tea was very welcome and the muffins were really nice - fresh out of the oven.

We then took a drive out onto the beach and drove several miles along the beachfront. We followed the lapping waves up to Eli Creek, a river which protrudes out of the rainforest and joins the sea. We took a break and had a walk through the very shallow creek. The cold water was very refreshing. Around this area there were light aircraft taking off and landing for people taking the scenic air tours of the island.

A little further up the beach is the shipwrecked Maheno, once a luxury ship which came into trouble along the shore in the 1930's. Our guide advised us that due to the severe weathering of the wreck it's likely that the next big storm on the island will wash the wreck away completely

For our lunch stop we were taken to a small caravan park where our guide cooked up a steak on the barbeque with plenty of salad. We also had as much wine and beer as we wanted. It gave us the chance to chat to some of the other people on the tour. Another couple we spoke to had also been doing some touring of Australia in a campervan and were heading southwards.

Fully fed and watered, we hopped back on the minibus and were taken past the Coloured Sands. These are huge sandy pinnacles formed from sediment from the ocean during the last ice age and are of particularly high importance to Aboriginal people. As we had a few minutes to spare our guide took us to a lookout over the desert.

The last stop on the tour was to Lake Allom. Our guide advised us that this is a lake formed from rainwater and that the water is so soft it is supposed to make you look younger when you swim in it! A few of us couldn't resist a swim! The water was really warm and there were little fish and turtles swimming around. It was a great little swim and a refreshing end to the tour. All that was left was to return to the minibus to be taken back to the marina.

We were lucky enough along the way to spot a couple of dingo puppies. They very kindly stopped so we could take a few photos. Our guide said that it's very rare on the tours to get such a good view of the dingos as they tend to shy away from humans.

The tour around Fraser Island was a great day out. The cost of the tour was $195 AUD each, so it isn't cheap. This does include the ferry fee, the national park fees, our morning tea and lunch (including all drinks, beer, water etc.) and a great tour guide who was really informative about the history of the island and all the wildlife and vegetation. I think it was worth the money, and it's certainly not an experience we would ever get anywhere else as the island is truly a special place.