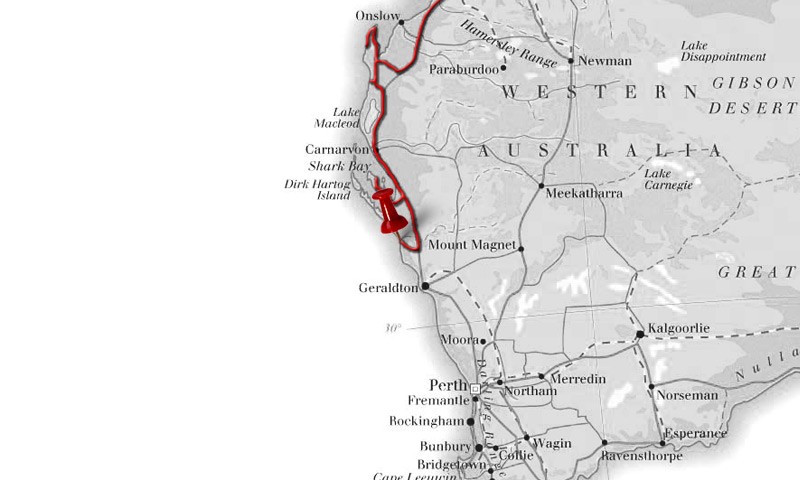 We were up and about especially early this morning to catch the feeding of the dolphins. We were advised to be on the beach at 7:30am, for the feeding at 8am. As sure as clockwork, the dolphins arrived and were swimming up to and along the shoreline of the beach. There was obviously quite a crowd of people there which made taking photos a little tricky at times, but Stu managed to capture some good shots. Some of the dolphins seemed to enjoy having their photo taken. At feeding time the conservation volunteers take their places along the shoreline and pick members of the crowd to come forward and feed a fish to the dolphins. Unfortunately, neither of us were picked, but it was interesting to watch them being fed all the same.

After leaving Monkey Mia, the drive back to the main highway took us past a few sights. We turned off for Eagle Bluff, which had a boardwalk constructed to take you along the cliff walk. We managed to spot some baby sharks and stingrays down in the water, which was pretty cool.

A little further we stopped off to see the Stromatolites at Hamelin Pool. These are lumpy ayers of calcareous material which are formed - similar to a coral reef - by the build up of tiny living organisms which eventually die and are replaced by a new layer. They are essentially living fossils which are thousands of years old. They're not the most exciting things to see, but it's interesting to wonder the changes in the world since they started growing.

We soon found ourselves driving through Kalbarri National Park, and took the opportunity to take some pictures of the lovely banksias growing along the sides of the road. We also turned off to see a couple of the lookouts. The Ross Graham lookout was the first stop, with a great view over the Murchison River and rock formations of the area. Thankfully, this was only a 100m return walk, as the temperature outside was incredibly hot - probably the hottest we've encountered so far. We didn't have a temperature gauge, but the signs to the lookout advised that temperatures in the gorge regularly reach 50 degrees in summer, and I think it was not too far off that.

After taking a few pictures, Stu decided to walk down a bit further to the river. This walk was only a 600m return, but I'd had enough in this heat. I advised Stu that it might not be a good idea to walk down there, as he'll have to walk back up to (and with his camera rucksack on his back), but Stu insisted he'd be fine.

As I sat comfortably in the van with air con on max, I eventually saw a red and sweaty Stu walking up to the van. He said he didn't realise just how tough it would be to walk back up the path in the heat, and with his camera equipment. He said he came really close to leaving the bag and just coming back up without it. Not only was the weather so incredibly hot, but I think when he realised how tough it was walking back he began to panic that he might not make it - which obviously sets the heart racing even more. Once back in the van and rehydrated with some cold water, he felt a lot better and was fully recovered, but I think he learned his lesson on that one. It just goes to show how deceiving the heat can be, because you think that a little walk will be fine, but it can totally overpower you. There was another lookout at the gorge, but we decided that we'd call it a day on the walkabout front, and headed for the town of Kalbarri to get a pitch for our van for the night.

After Stu had relaxed in the campsite pool for a while he went out to capture some sunset pictures - which turned out really well. At the same time he managed to get bitten all over by mosquitoes! You win some, you lose some. I don't think it had been Stu's day today!