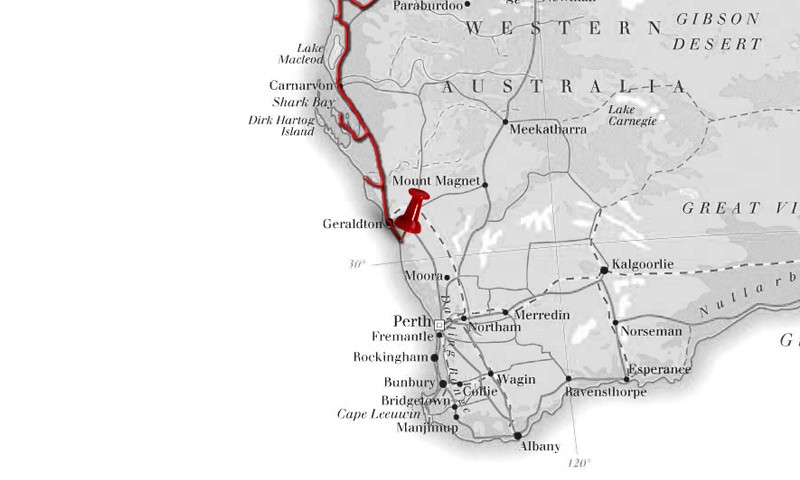 We awoke to a much cooler day today. The air was still warm, of course, but there was a fair amount of cloud and combined with the breeze made things feel a lot more pleasant than yesterday.

On the way out of Kalbarri we drove through another area of the National Park which took us to a few attractive lookouts. Red Bluff and Eagle Gorge offered some great views out over the cliffs to the sea, but Castle Cove (Island Rock), Grandstand and especially Natural Bridge were the most stunning. Natural Bridge was a natural rock formation where erosion had created a natural arch into the sea. Castle Cove too was formed by the erosion, leaving a small 'island' of rock standing along at the edge of the cliffs.

As we continued along the highway, we saw strange phenomena. We drove past an area of sand and water, where the water appeared to glow pink in the sun. We parked up so Stu could take a closer look, and some pictures. He also hoped to solve the mystery of the pink colour, but it was unclear how it was occurring. He said that the water was simply pink. We guessed perhaps it was some sort of mineral present in the water, but we're still unsure. Hopefully when we next have the chance to surf the web properly the answer might turn up.

There was another brief lookout along the highway called Elephant Hill. The information sign advised you to use your imagination to visualise the hill beyond being an elephant lying down. It was quite a stretch of the imagination, but still a nice lookout.

When we made it to Geraldton, a fairly large and attractive port town, our first stop was at the HMAS Sydney memorial. This was a memorial to the men lost when the HMAS Sydney was sunk in the Indian Ocean during WWII. The design of the memorial features a steel dome comprised of 645 seagulls - one for each of the men who died, a bronze life-sized statue of a woman looking out to sea waiting, and a huge steel prow of the ship. It was an impressive memorial, which also of course included a wall of remembrance which listed the 645 names.

Our next stop was at the St. Francis Xavier Cathedral. An impressive building built in the 1930's, but annoyingly for Stu, there were two women standing outside having a fag who just wouldn't budge - so were included in the photo!

Next we headed to Greenough. This is a 19th century hamlet which has been restored by the National Trust, and (for a small fee) you can walk around the old buildings on a self guided tour. Some of the buildings, especially the churches, police station and gaol were of particular interest. It was interesting how the white prisoners were held in small cells either alone or in pairs, while the aboriginals were all held together in larger cells or shackled to an iron bar at the back wall.

Another interesting feature of the Greenough is the river red gum trees which seem to grow horizontally. This appears strange at first, but when you feel the strong winds blowing across the plains you realise why they grow this way. A weird sight though.

We decided to press on a little further to the seaside town of Dongara, finding a nice little campsite by the beach where Stu, once again, managed to capture some fantastic sunset shots.