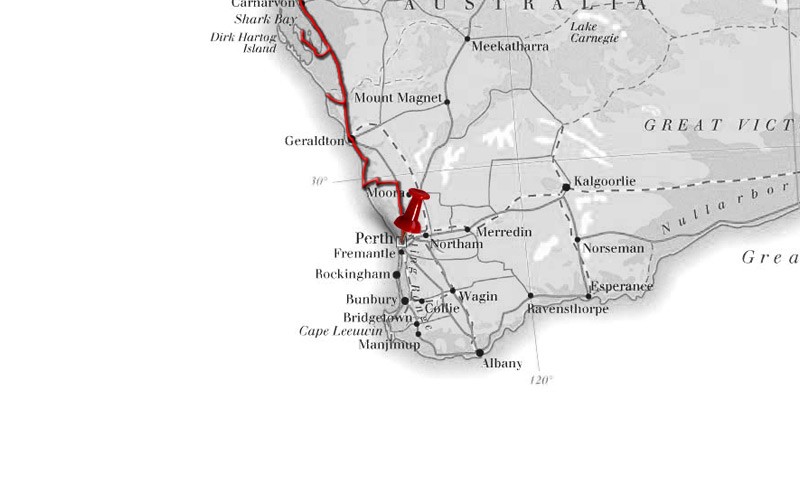 The weather is certainly a lot more pleasant in Perth than in the northern areas of Western Australia. It feels a little like Sydney's climate - quite Mediterranean.

There is a bus stop further up the road from our campsite which takes you into the city centre. The cost for a day pass, which also gives you unlimited travel on bus, train and ferries, was $8.40 AUD each. It would cost you that just for a bus ticket in Bristol!

Once in city we popped into the tourist information bureau, picked up a map, and started a walk around. We decided to eat our lunch on the Esplanade, a large grassy area by the edge of the river in the shade of a tree. The modern Swan Belltower was nearby and within hearing range. This is the largest musical instrument in the world and we were entertained by some chiming as we ate our lunch. There was also a big wheel structure by the riverside, which looked a lot like the London Eye.

A short walk from here took us past some other interesting buildings - the Supreme Court of Western Australia being quite impressive. Stu had noticed from a information guide we'd picked up that there was an exhibition being held near the Art Gallery called Earth from Above by Yann Arthus-Bertrand. The exhibition consisted of 120 emotive images taken from the air - the aim being to create a record of the world's environment for future generations, and for us to consider the impact of our footprint on the Earth�s surface. Some of the shots, which were in huge print, were amazing. They had books, posters and postcards available to buy and we are considering buying the book from Amazon when we return to the UK.

We also ventured into the Art Gallery of Western Australia, where there were some interesting exhibitions too. Of particular interest to us were the works by Aboriginal artists and some of the sculptures on display. It was an enjoyable gallery on a par with the Tate Modern.

After many hours walking around the city, we sought some refuge at a pub called Bobby Dazzlers. We were certainly in need of some refreshment. We also decided to grab some dinner while we were in the city. We noticed an Italian advertised in the information guide, and took a walk. We found the area of the restaurant to be similar to that of Oxford Street in Sydney with lots of cuisines on offer.

The Italian restaurant we'd picked seemed nice, and the staff very friendly. My pasta dish was nice but unfortunately they had overcooked Stu's pizza, and it didn't look too pleasant either, so he left most of it. The waitress apologised and they came back and said they weren't going to charge us for it. It's not nice to have a bad meal, but at least we didn't have to pay for it. Luckily, my pasta dish was huge and I couldn't eat it all, so Stu didn't go home hungry.

Once we got back to the bus station to wait for our bus back to the campsite, we started to feel really tired. It had been a long day and decided on an early night to try and recharge the batteries.