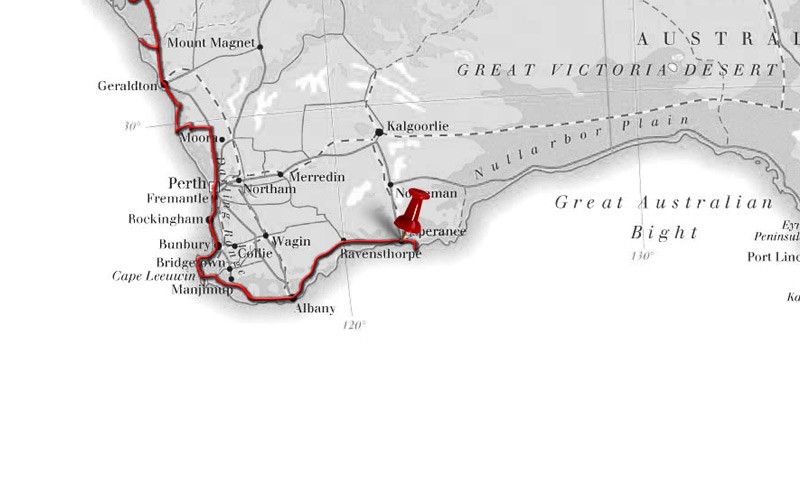 Today we drove to Esperance further along the south coast. Once there we took the Great Ocean Drive, a loop west of Esperance around the breathtaking coast. There were some great lookout points, incorporating beaches, rocks and the huge crashing waves (it looked a little rough out there!).

Although it was really windy today, you'd be wrong if you thought this meant a refreshing cool coastal breeze. The temperature today was 45 degrees, so standing in the wind was less like a 'nice breeze' more like standing under a fan-assisted grill! The strange thing is, having just seen the weather forecast for tomorrow it's going to be just 22 degrees. It's crazy how much the temperature can change within 24 hours.

We drove down to Cape Le Grand National Park, after getting slightly lost thanks to our satellite navigation taking us around the houses. This area has spectacular scenery, with huge rocky peaks as well as beautiful sandy beaches and crystal clear waters. We drove past Frenchman Peak, which is a huge granite peak with a rocky 'cap' on top that you can see through at certain angles. We also drove up to Whistling Rock which makes a gentle sound as the wind gushes past. There were also more stunning views of the coast and over the water.

We'd seen some lightening bolts flash behind the granite peaks, although we didn't hear any thunder or have rain while we were there. We must have timed things just right, as the rain came down and the thunder could be heard just as we were driving out of the park. It was an amazing national park, and worth getting slightly lost to start with. I'm glad we still had time to see this area as it would have been a shame to have missed it.

We decided to stop at Esperance tonight as the next major part of our journey will be the Nullarbor Plain.