Attack Of The Whirly Winds! 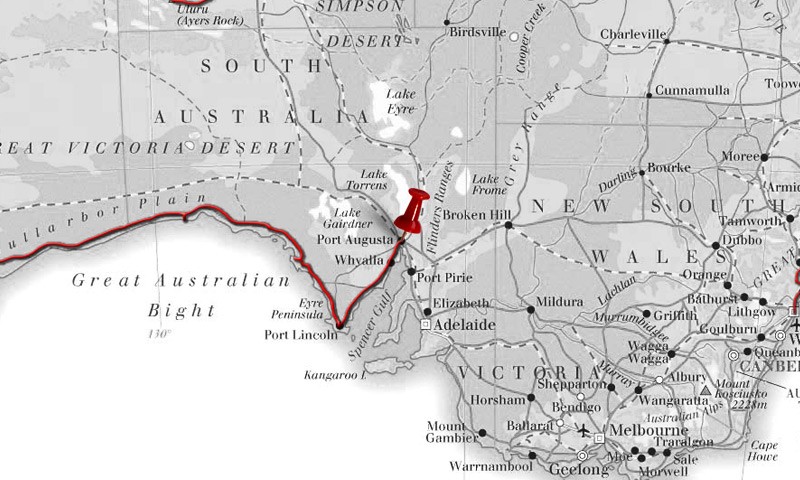 It was very hot again today. The heat wave currently hitting South Australia and Victoria has been the main focus of news reports. There have been over 30 heat-related deaths recorded in South Australia in the last few days. The temperature has caused electricity blackouts, meaning people have not been able to have continuous use of their fans and air conditioners. Unfortunately, it is the most vulnerable people, the elderly, who seem to be the victims in all this. South Australia has issued a state emergency warning as a result. The temperature is 40+ degrees, up to 48.2 recorded in one town, and still lingers in the mid 30's at night. To think that night time, with the sun 'switched off', reaches temperatures that would be recorded in the UK (in the height of summer) as a heat wave is mind-boggling!

We continued our journey back up the east side of the Eyre Peninsula. The first place we stopped at was Arno Bay. It had a viewing platform so that you can look over the bay. It's quiet and undeveloped place, only really worth a brief stop.

The landscape in South Australia, when away from the coast, is a reminder of the Northern Territory in places - quite red, dusty and dry with some mountainous ranges.

We made a stop at Whyalla beach to have some lunch, and then continued on to Port Augusta where we would stop for the night. On arrival, we decided it would be best to open up all of the doors and windows to get a bit of a breeze blowing through the van. In these sorts of temperatures it would take too long for the air conditioning to cool things down (if at all), so it's best to wait for the sun to start setting before putting that on. Stu was busy fiddling with pictures on his laptop, and I decided to progress with Mario on the Nintendo DS. The breeze did blow through now and again, although the air was still warm it was better than nothing.

All of a sudden the wind picked up considerably. My initial thought was "this is nice" but that transpired pretty quickly. The next thing there is a huge rushing noise with dust, leaves and debris blowing right through our van! With little time to react, Stu thankfully managed to close his laptop in time - but pretty much everything else was covered in dust, dirt and twigs. When we looked out of the van, we noticed what looked like a mini tornado making it's way through the campsite. We've seen a few of these on our travels, mainly in the Northern Territory where there are open dusty plains. Although they aren't too big, they make a considerable mess! We spent the next 20 minutes shaking and wiping the dust off everything. I suppose it could have been worse. I'm just glad we weren't in the middle of eating or Stu cleaning his camera. Needless to say, we closed the doors after that and put on the air conditioning!