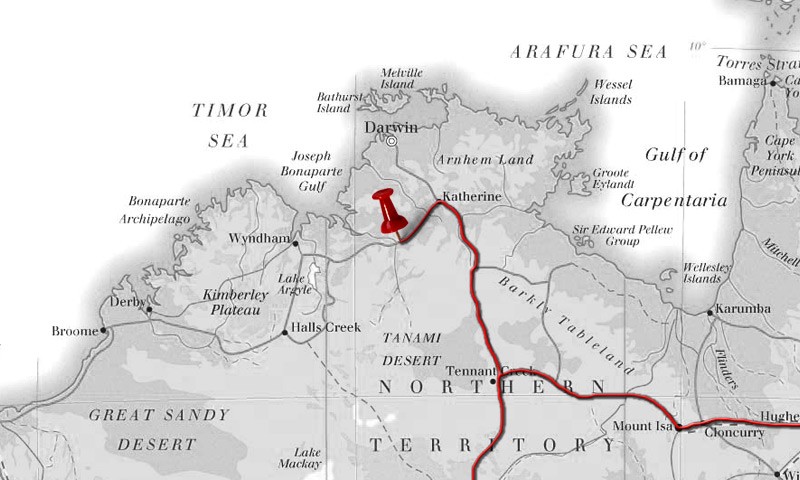 Unfortunately we didn't get to visit the pub at Daly Waters at all. The guy at the roadhouse advised us there was another turning that would take us to the pub that wouldn't be flooded. After about 10km along the highway, we realised this turning did not exist, and it seemed too much hassle to go back and see if the flooded road had cleared, so we just continued on.

The next place we decided to visit was a small town called Mataranka. Our book indicated that it had some thermal springs that were nice to swim in. However, after taking the relevant turning we were stopped in our tracks by a flooded river. It looked pretty deep; there was no way we'd make it through in the van. Therefore, it was back onto the highway for us.

We made it up to Katherine, which is the biggest town from Alice Springs. However, although it had plenty of shops it didn't appear to have much else to offer us so we simply stopped here to stock up with supplies.

We continued on to Victoria River. This area become a lot more lush and green once again, as apposed to red and arid as we had become used to in the Northern Territory. As we got closer to Victoria River the landscape also became more mountainous and picturesque too. It reminded us a lot of driving up to Cairns in Queensland.

We were advised by our travel book that the Victoria River crossing can sometimes become impassable during the wet season (now!) so we telephoned ahead to make sure that we could get through. Thankfully, things were fine. But when we got to the river crossing it's clear that flooding is quite a big issue here, as they are currently in the process of building another bridge with higher clearance over the river.

The campsite we stayed at was fairly basic once again, but it did have a bar where we could grab a few beers which kind of made up for things.