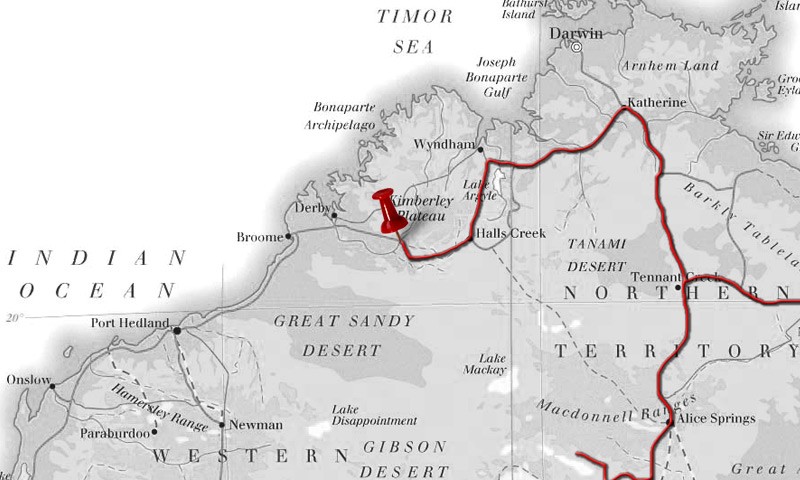 After looking through our travel book at what we could do in the region it became painfully clear that we are here in the wrong season. The best time to visit the Kimberley is between April and September, as it's dry and cooler. It's January and we are well into the wet season - not that we have experienced any rain in the last few days. Nevertheless, tours and parks close up as there are very few visitors - except us!

We looked into a helicopter flight over the Bungle Bungle National Park, passing over Lake Argyle and the diamond mine. Unfortunately we were told that all scheduled flights were off because the aerodrome at the park is closed. We could have chartered a helicopter from Kununurra, which is further away, but the 2.5 hour roundtrip at $916 AUD per hour sounded the death knell for that idea! We would have both liked to have seen them, but at that price we can find a lot of other things to do.

With tours off the menu we took a look at the local map and decided to visit Kellys Knob. This would afford us with a lookout over the local town. It was OK, but we have seen better lookouts on our trip already. We then made our way to Mirima National Park. This park is affectionately called 'the mini Bungle Bungle' so at least we would get some 'bungling' in after all. It was a pleasant little drive and I captured a few photos. We didn't fancy the walk as it's simply too hot.

We then hit the road and headed down to Warmun (Turkey Creek). There was some spectacular scenery enroute, huge mountain ranges, gorges and creeks. We found a lookout and took in the amazing vista. We couldn't help but feel a little disappointed that the helicopter wasn't running as it would have been amazing to fly over the landscape.

Halls Creek was the next destination and after a couple of hours we reached the small town and looked around for a caravan park. We did find one, but it looked shabby - a lot like the rest of the town. Given our experience of staying in grubby roadhouses we really wanted somewhere a little better. The next logical stop would be at Fitzroy Crossing nearly 300km to the west. It was 16:30 already, so we'd be arriving at 19:30. We figured that calling ahead would be a good idea, but surprise surprise had no mobile phone reception. After wasting 30 minutes trying to find a public phone (including asking at a leisure centre, two garages, a hospital and police station) we gave up and just hit the road anyway. What sort of backwards town doesn't have phones?!

The drive to Fitzroy Crossing was fine. The scenery had become more savannah-like, flat and with little features. There were lots of huge termite mounds dotted across the landscape, some the size of a small car! They have a range of colours, depending on the soil, from pale brown to deep red. We saw a small 'controlled burn-off' of vegetation being performed, and realised that opening windows to photograph a bush fire is not a clever idea.

We arrived at the camp site and cooked up bangers and mash and watched some TV. It was a pretty relaxing end to a day spent mostly on the road.