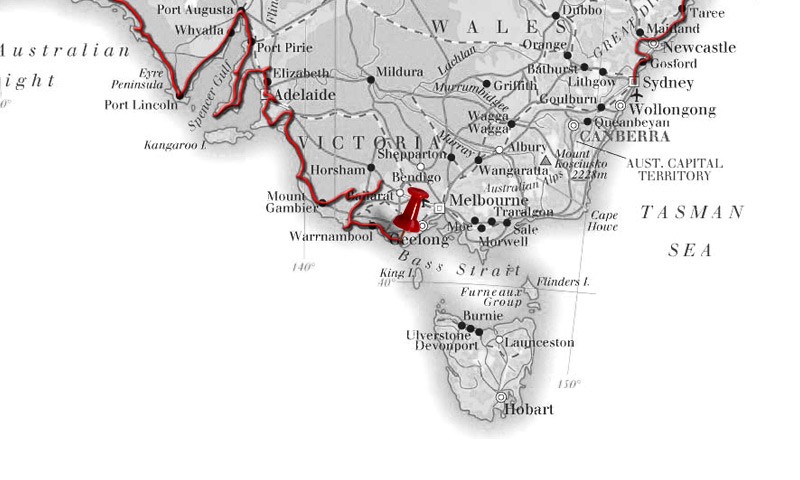 Shortly after leaving Portland we came across The Crags lookout which had some great views over the cliffs as well as an area in the rock known as petrified plants. Like the Petrified Forest we saw yesterday, they are formed where the plant roots rot away and the area the roots occupied is filled with calcium carbonate deposits over many years. These harden over time and appear as plant roots made of rock, quite an interesting sight.

We continued driving east along the coast which took us through the Bay of Islands and Port Campbell National Parks. This drive is along the Great Ocean Road, which has many amazing lookouts including precipitous cliffs, coves, beaches and numerous sandstone pillars of varying shapes, sizes and patterns. The most famous of these are the Twelve Apostles, although there are other points which are equally, if not more, spectacular. Our particular highlights were London Bridge, The Arch and Lord Ard Gorge. These sandstone natural creations really are an amazing sight and we spent the whole day just stopping off at each one to have a look and take pictures.

We found a campsite at Princeton, just near the Twelve Apostles, so that we could pop back to the Twelve Apostles at sunset so Stu could get some pictures. A substantial rain cloud had blocked most of the golden sunset light, but he managed to capture a few shots anyway.

It was really windy by the coast all day and with the added cloud and the odd spot of rain it added to the cool feeling of the day. It makes a pleasant change I guess, but it will be nice when the temperature increases a bit, as is forecast in a week or so. We are starting to remember what it's like living in the UK!

The news reports say that there are still a couple of fire alerts for certain small towns to the east and north of Melbourne, although they no longer pose a major threat to residential areas. Our itinerary was to venture into at least three national parks which are east and north of Melbourne (Bunyip, Yarra Ranges and Kinglake), but unfortunately these have all been badly hit by the bush fires and I believe at least a couple of them are still burning and pose a possible threat. As a result we'll be sticking to the coastal areas of the state rather than venturing inland. We keep up to date with the news so we won't be putting ourselves in any unnecessary danger - just to put peoples minds at rest! To be honest, we arrived in Victoria at just the right time as at least we know the places to avoid. If we had arrived a couple of days earlier things could have been very different for us.