A Wander Around Melbourne 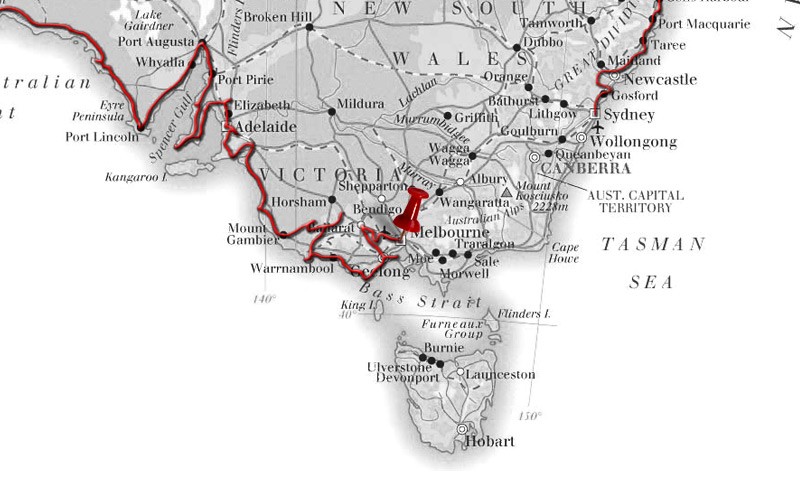 When we first opened the door to our cabin this morning we could smell the smoke in the air. I was surprised that the smell would reach this far but it was really noticeable. The sky was also hazy again from the smoke. As the day went on the haze and smoke in the sky did clear which was good.

Lucky for us there is a bus stop right outside our campsite which takes you right into the centre of Melbourne. We got a day ticket which was just $6.80 AUD, pretty good value. The journey probably took around 30 minutes or so to get us into the city centre.

When we arrived in the CBD we took a walk towards Federation Square. This is a famous landmark within Melbourne's city and is certainly an interesting architectural area.

Walking past the square you come to Birrarung Marr which is the area leading up to the Yarra River. Near here is a pedestrian bridge, upon which is an area where they have constructed the Federation Bells. The sign told us that they would play at certain points during the day, so we waited a few minutes until the next time slot, but they didn't start playing! Bit of a shame really, but not much we could do about it.

Walking through Melbourne, my initial impression of the city is that it seems to have an older feel about it than Sydney. Although there is a mixture of old and new buildings, the same as Sydney, the buildings seem more mixed together. The problem with Sydney is that the CBD is very separate to the more cultural and leisure areas. Walking through the centre of Sydney you simply walk past office buildings and skyscrapers, and the precinct becomes fairly dead gone six o'clock. Melbourne on the other hand has a mixture throughout, offices mixed in with cafes and restaurants - far more so than in Sydney anyway. As a tourist it's very easy to get around the main areas of the city centre thanks to a free tram service which runs every 15 minutes in both directions around the city centre circle. On the tram there is an audio commentary which advises you on things going past the window and what to see and do at each tram stop. We found this really handy as walking around city centres can be quite tiring. This helps to make the most of the day.

Stu decided that he wanted to get a decent strap for his camera to make carrying it a little more comfortable. Whilst in the shop however he also decided to go on a bit of a spending spree! Needless to say I spent the next 30 minutes staring into bored space while Stu decided to buy various additions to his camera, which included a wide angle lens. I'm not sure about my way around Melbourne just yet, but I can tell you exactly where the camera shops are!

We headed back to Federation Square to grab lunch at one of the restaurants. It was nothing special, but then restaurants that are so strategically placed in city centres never are. Nevertheless it kept us going for the rest of the day and we headed back to the tram to take us along to Fitzroy Gardens. The grounds house a Conservatory containing an attractive display of flowers and also Cook's Cottage, the original cottage built by Captain James Cook's parents in 1755 and transported over here from Yorkshire in 1934. They charged a small amount to get in, but we didn't bother and just took pictures outside.

It was a bit late after this to visit Old Melbourne Gaol as we'd intended, so we decided to call it a day in the city and got the bus back home.

We disgraced ourselves by driving to McDonalds for dinner when we got back to the van. The plus side being that McDonalds usually have free wireless internet so we managed to check emails and upload blog posts.