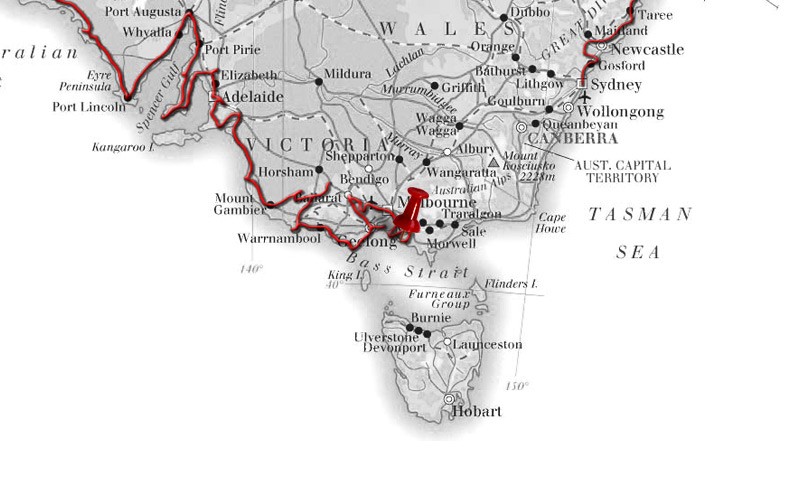 Before leaving the campsite in Melbourne this morning I got chatting to the couple parked next to us. They were only in Australia for a couple more days and were going on a coach tour today so had loads of food they wouldn't be able to eat. So we got some ham, potatoes, avocado, salad leaves and even a couple of beers - brilliant!

We drove to the south of the city towards St Kilda. This struck us as being a quite a popular seaside area. We just took a drive along the coastal road and past the Luna Park entrance.

We then drove down the west side of the Mornington Peninsula. We stopped briefly in Sorrento for lunch and then continued down the peninsula to the Mornington Peninsula National Park which starts at the tip and continues along the south coast. There was a nice lookout called London Bridge, not quite as spectacular as the version along the Great Ocean Road, but still very nice.

We continued our drive back up the east side of the peninsula, still clinging to the coast, and eventually crossed the bridge over to Phillip Island. We took a brief drive to Cowes to get some food, and then headed to a caravan park to get a pitch for the night.

After cooking some dinner we decided to head out to the west side of the island for the Penguin Parade. Each evening around dusk you can watch the little fairy penguins arrive at the beach from the sea and waddle there way up the beach to their burrows in the dunes. We were advised by our guide book that photography was not permitted, but I think Stu thought it would be ok without a flash. However, after paying our money ($20 AUD each) we were advised that absolutely no photography is allowed, even without a flash. Their reasoning was that even if you don't have a flash on your camera, by using your camera it could encourage other people to use their camera and they may not know how to deactivate their flash. We were a bit bemused and quite disappointed to be given the opportunity to see this natural phenomena (which we are paying for) but not trusted to use a camera properly. But we had already paid our money so decided to make the most of it.

Another issue we had was the waiting around. We should have learned our lesson from the Mon Repos Environmental Park back in Bundaberg! We had been advised on the phone to arrive at 6:30pm, with things starting at 7:30pm. However, upon arrival it turned out that 7:30pm is when they open to allow you down to the beach. The actual time of arrival of the penguins is around 8:45pm! It soon becomes apparent why they want you to get there so early. They have built a whole complex which consists of a big cafe/restaurant, a large gift shop, internet cafe, sweet shop and stands which sell snacks and drinks - together with numerous staff and rangers. Now it becomes clear where a large portion of our entry fee goes and why they ask for even more donations to help protect the penguins.

We made our way down to the beach, where they have erected a series of concrete steps for all the visitors to sit. We managed to grab a seat at the front so we sat and waited.

We were advised by the rangers once again that we were not allowed to take pictures, and also to remain as still and quiet as possible once the penguins arrive so as not to alarm them. Eventually, the first group of penguins began to arrive on the beach, and it was pretty amazing to see them gather together and then waddle up the beach. Soon after, further groups of the little penguins began to arrive, so there was plenty to see. The irritating thing, other than not being able to take pictures, was the fact that as soon as the penguins arrive people start running up to the front of the beach to get a closer look and making loads of noise (particularly a group of Japanese women behind us who wouldn't keep quiet!). The rangers try and control it by telling people to sit down and keep quiet, but it doesn't really work. It was also really annoying that although they wanted people to keep still while the penguins were there, they continued to let people onto the beach well after the penguins made their first appearance - which just didn't make any sense. In the end, so we found out the next day, there were over 1300 visitors who came to see the penguin which is way too many. If they had kept the numbers down (which with $20 AUD a head I'm sure they could afford) and only allowed people onto the beach prior to sunset, the experience would have been a lot more enjoyable and the rangers would have a better chance of controlling the crowd. It's a shame that while they maintain the emphasis is on conservation, it is quite clear that this was a commercial exercise - and it didn't quite sit right with us. It was great to see the penguins, and you got to see them more close up when you walked back up the boardwalk to the visitor centre where you could see them resting on the dunes. However, the commercial aspect is a bit 'in your face' and really unnecessary. Stu remarked that 'at $26,000 a night to see penguins we are all in the wrong game'.

Anyhow, we are glad we saw the penguins and they were really cute. Such a shame we can't show you with any pictures though!