Albatross! Come And Get Your Albatross! 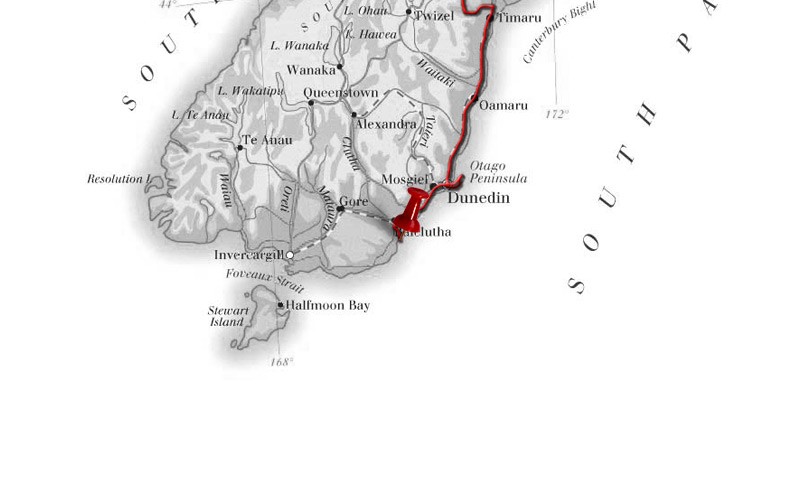 This morning we took a bit of a drive around the city of Dunedin. There were some nice old buildings to see in the city centre, including the First Church of Otago, Town Hall and the Railway Station. Dunedin has the steepest road in the world, Baldwin Street, which boasts a gradient of 1:2.7. Needless to say we didn't attempt to drive to the top as we'd probably destroy the clutch! It looked very steep, even compared to some of the roads in Bristol.

Around a fifth of the population in Dunedin are students and around the university area you can tell which are the student houses - they looked a total mess with bottles and all sorts of junk in the gardens. Thankfully, the rest of the city is quite pretty with little houses dotted along and up the hillside.

One of the main reasons for coming to Dunedin was to take a drive along the Otago Peninsula which stretches east along the southern edge of the harbour. Unfortunately, the weather today was very cloudy with the odd bit of drizzle. This meant that the higher hills were cloaked in a thick fog. However, this in itself was fascinating to see so still made the trip well worth doing. After stopping along the road for some lunch we took a drive up one of the steep turnings towards Larnach Castle - the only castle in New Zealand. The drive was amazing, and a little eerie near the top. We couldn't see more than 10 metres in front of us and the edges looked like a misty abyss. When we arrived at the castle entrance we found that there was a fee for just entering the grounds so decided against it as we wouldn't be able to see it very clearly or take any decent pictures. A bit of a shame, but they'll be plenty more to see.

We headed to the tip of the peninsula at Taiaroa Head which is the home to the world's only mainland colony of Royal Albatross. You were not allowed to proceed past the visitor centre without being part of tour, which of course costs money. We thought $39 NZD each was a bit steep to see the albatross, so we walked round to the cliff edge to see if we were lucky. Actually, there turned out to be plenty of opportunity to see the albatross flying along the coast and Stu managed to get some good pictures. Glad we didn't pay for the tour after all! There were also plenty of other birdlife flying around. At the peninsula tip it was really windy, it almost reminded us of our skydive! But we feel pretty chuffed to have seen the albatross flying above us.

We drove back along the peninsula, once again admiring the stunning hills and countryside. The scenery becomes a bit overwhelming as it looks so amazing nearly everywhere! We look another drive up to through the hills towards Dunedin, which took us up through the mist again. I think Stu was getting a bit concerned being in the passenger seat with a sheer drop into the mist to his immediate left! And it wasn't without good reason as at one stage there was a roadwork sign indicating a section where the side of the road had washed away - scary!

Once back at Dunedin we continued our drive south. We passed more amazing countryside, including Lake Waihola where we stopped for a quick photo. We also passed even more sheep. I knew they had a lot of sheep here but this is crazy, they are scattered everywhere like white confetti on a lawn.

Eventually we decided to take a short detour to Kaka Point and get a site for the night.