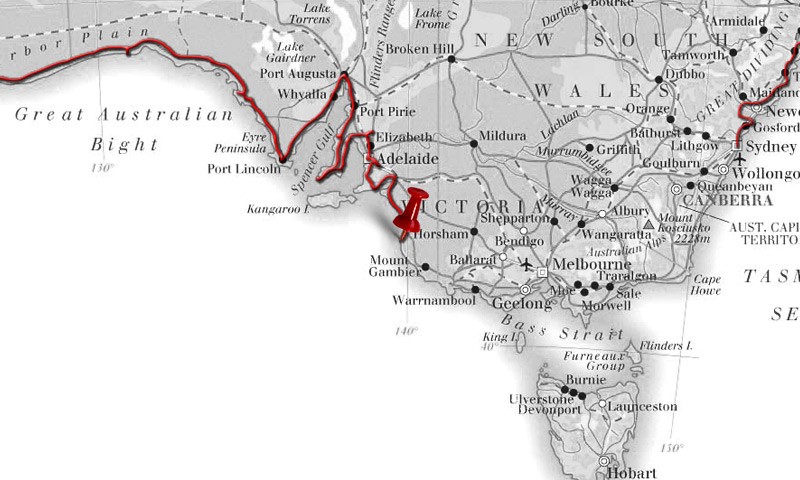 We stayed in Victor Harbour briefly this morning to have a look at the coastline. There is an undeveloped beach and a connection to Granite Island via a horse drawn double decker tram across a jetty. We stayed to watch the tram come back from the island, then hit the road again.

We paid another brief visit to Murray Bridge. This town was established in 1850, and the location of the first bridge to span the Murray River. The one kilometre structure was built in 1879. Other than the bridge and river, there is little else to see in the town so we continued south.

We ended up doing a fair amount of driving today, taking the main highway south and along the coast - although there wasn't a terrific view along this route.

We stopped at a small town called Kingston, the main reason being the giant lobster we saw on the side of the road! This was in keeping with the Aussie tradition building large foodstuffs out of fibreglass and placing them outside their tourist hotspots- the Big Banana at Coffs Harbour being the forerunner of this tradition. It also had an interesting lighthouse that was worth stopping for.

As time was getting on it seemed a good idea to find a campsite, so we headed to Robe a little further along the coast. We stocked up with supplies to make spaghetti bolognaise for dinner and then settled down. Unfortunately, we prepared everything for dinner but the moment we tried to light our gas hob we discovered that our gas bottle had run out! Thankfully, the campsite has a well equipped kitchen with a decent gas cooker - so our dinner was saved!

The weather has been another warm one today and there is forecast for a scorcher tomorrow but temperatures should be back to around 25 degrees on Sunday. That will be the coolest daytime temperature we will have seen in many weeks.