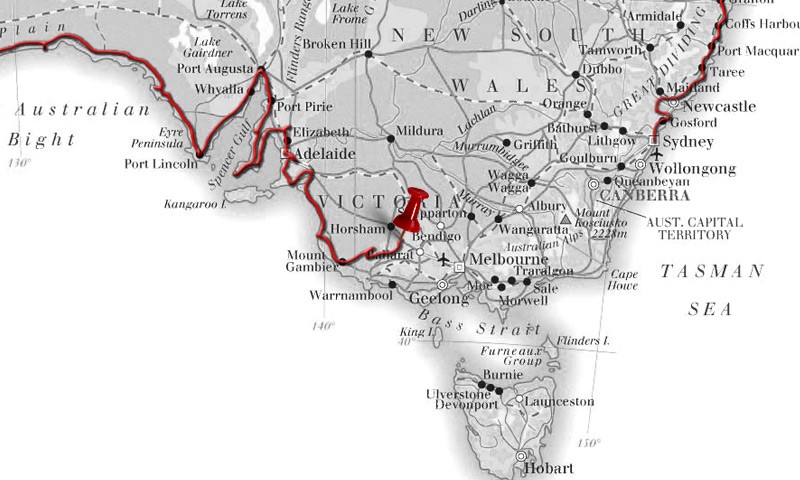 We'd had a bit of rain in the night and as a result the day started quite cool. I even put on a pair of trousers - the first time I've worn trousers since we started our trip!

We headed to the visitors centre in Halls Gap to get a map of the area and then drove around the national park to take in the sights. Boroka Lookout was really impressive, with a fantastic view over The Grampians and down to the valley. It was a little hazy because of the weather conditions, but still a great view.

We continued on to MacKenzie Falls - a large waterfall with another small waterfall nearby. It was an easy enough walk to get to the falls from the car park, nothing like Mount Timbeerwah in Queensland!

As the day progressed, the weather began to improve and we even got some sun. We thought it might be worth heading back to the Boroka lookout to see if the haze had passed. Luckily it had and we managed to capute some better photographs.

We drove through the town of Halls Gap to grab some lunch at a cafe, and then onto Mount William. This ascends high into the Grampians, with yet more terrific views.

Although we still had plenty of the day left we both felt really tired. We decided to stay at the same campsite in Halls Gap. It was a nice campsite and it saved having to do another long drive again today. It meant we could also get some much needed washing done and grab an afternoon nap. I even put on my cardigan - the first time in over 2 months! It wasn't cold as such, but there was a little chill with the wind. It's quite a contrast in conditions from just a few days ago.

It's been hard to avoid the news reports on the local radio regarding the Victoria state bush fires. The latest news is that 84 people have been confirmed dead and 700 homes have been destroyed by the fires. There are around 26 fires still burning around the state, mainly in easterly areas. They are reporting that these are the worst bush fires in Victoria's history - mostly caused by a combination of the hot and dry conditions and thunderstorms. Some are thought to have been started deliberately - which given the conditions and the vast bush land in this state completely defies belief.

We're very lucky to be where we are, and at least we can plan our route through Victoria safely as we now know the areas to avoid.

On a side note we'd like to wish Phoenix Joel Cam a happy first birthday!