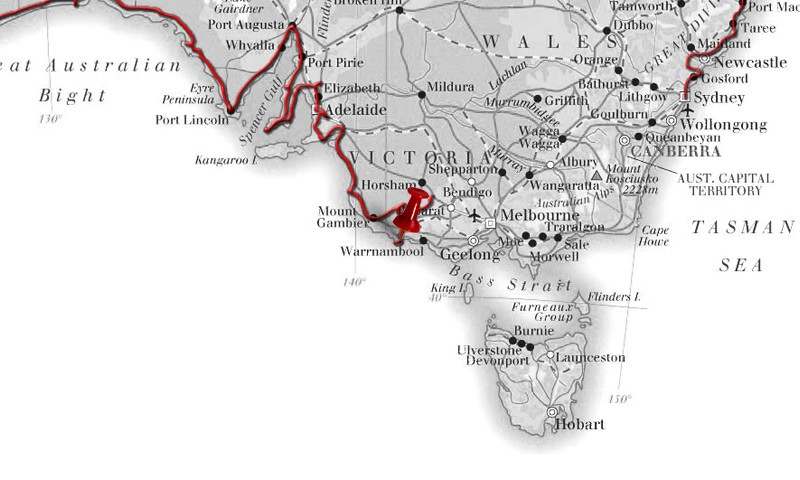 We awoke to a slightly chilly morning for the first time on our trip. Although the sun was shining, there was a cool breeze blowing through The Grampians which made a nice change. We still had some bird feed left so we decided to feed the cockatoos and crimson rosellas again, resulting in some more comic photos!

We left Halls Gap and The Grampians National Park along a different route so we could enjoy some more amazing views. We headed south from the mountains towards the coast and a town called Portland.

Portland is Victoria's earliest settlement, established in 1834 by the Henty family, with evidence of early buildings still remaining. We headed out to the coast which had some amazing scenery. We drove out to the lighthouse where there were also some great lookouts, and we even had the rare pleasure of spotting a wild echidna at the side of the road!

We drove a little further along the coast to Cape Bridgewater, which also had some terrific coastline. The highlight being a walk along the blowholes and the petrified forest, an amazing series of geological rock formations. The waves crashing against the cliffs looked incredibly rough, but were great to watch. There was a sign indicating that a ship was wrecked against these rocks in the 1800's.

We drove back to Portland so we could get a decent campsite for the night. This was the first time in a few days that we had mobile phone reception so I sent a text to my parents, just in case they were concerned about us being in Victoria at the time of the bushfires. Stu also got a call from his Dad checking that we were OK. Thankfully, we arrived in the state at the right time as we at least know the places to avoid as we make our way through.

During the drive we continued to receive updates about the Victorian bushfires. The last news we heard was that 131 people are confirmed dead, with possibly 1000 homes and buildings destroyed. It's clear that the tragedy is still unfolding with each passing hour. It's quite horrific to hear the stories of survivors who described 30 metre high flames ripping down the street, whilst they were driving the car away from the fires. We'll be making a donation to the Red Cross tomorrow, and we'd encourage our blog readers to do the same.