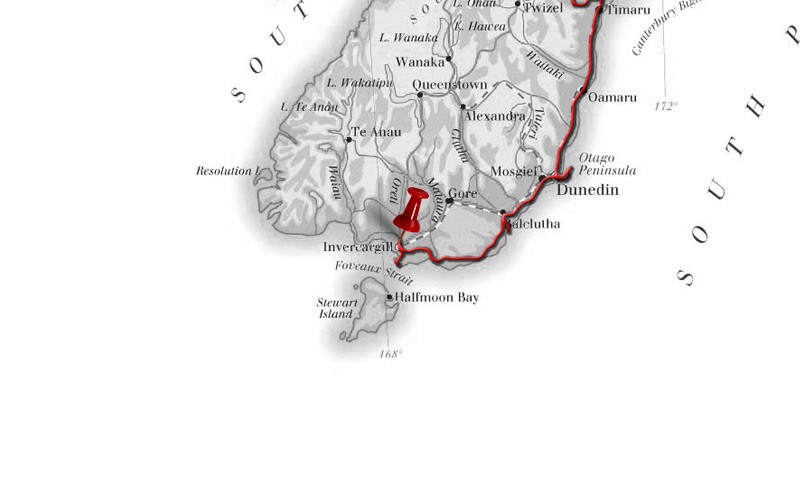 It was a wet start to the day. Nothing too bad but a fair amount of drizzle (or druzzle as they pronounce it on the weather report). We took a drive further around the southern end of the south island, taking in some more amazing county scenery. Because of the wet weather there was still a fair amount of mist on higher ground, which meant that a couple of lookouts were not worth the bother. We did make a couple of stop-offs on the way to Invercargill however.

We first stopped at Matai and Horseshoe Falls and after a short walk we were rewarded by some lovely little falls. Due to the damp conditions we put on our walking boots as there was plenty of mud around. They are finally getting their first proper use in 13 months!

We then stopped at McLean falls and took a longer walk to some spectacular falls. The water was running at quite a speed and made quite a racket bashing against the rocks below. There was ample chance to get a good view of the falls.

Along the way the weather changed a little. For quite a while it did actually clear up, at McLean Falls the sun had even made a break through the cloud cover. Although the weather is wet it hasn't been too cold, and when the sun pops through it does feel nice and warm. As we continued our drive it rained off and on.

We drove through Invercargill and along the coast to Bluff. A little further was Stirling Point, this being the southern-most point of the southern island of New Zealand. They had the expected signpost indicating distances to other places in the world, Sydney 2000km, London 18958km. We could also see Stewart Island a little way off the coast. This seemed a good spot to take a few pictures and grab some quick tea and biscuits.

Stirling Point is where the land and road stops, so we took the short drive back to Invercargill to find our campsite for the night. The rain was getting a bit heavier by this point, so it seemed a good time to make a stop. It's a shame about the weather, although in fairness the rain only got bad towards the end of the day. Hopefully it will let up soon.