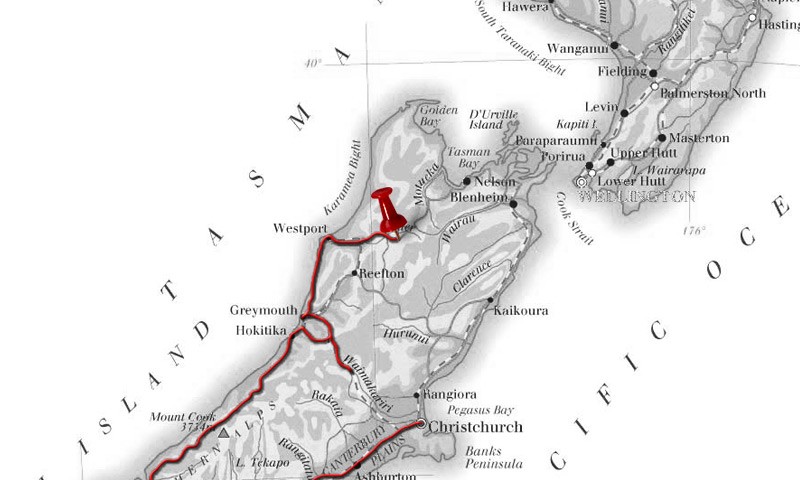 We didn't have high hopes for the weather today as it had rained most of the night and was still raining this morning. We continued driving north along the coast and came to Punakaiki, home of the pancake rocks and blowholes. There is a short pathway which loops you round to see the attractions. The blowholes were actually really impressive, certainly the best we've seen. The pancake rocks are bizarre limestone formations, named because they look like stacks of pancakes funnily enough. It was worth stopping off to see and they had a nice cafe to grab a coffee afterwards.

There was a great coastal drive further on from Punakaiki, very winding and you could see that conditions out to sea looked quite rough. We took a little detour to Cape Foulwind. Besides the amusing name, it also had a walkway which took you around the coast to see the seal colony. There were great lookout points to see the seals, and there were plenty of them to boot. There were quite a lot of smaller pups playing about in the water. Whilst the weather was fine for Stu to take some pictures, pretty much the moment we turned to walk back to the car park the heavens opened. Luckily we got the camera packed away and we had our waterproofs on, otherwise it could have been a bit of a disaster. This place was a great little find though, and Stu got some awesome shots.

We carried on driving further, and once we reached Westport we took the route heading east through the Buller Gorge. We came across the swing bridge, apparently the longest of its type in New Zealand. You can pay to walk across, and for a bit extra you can do a zip ride coming back. It looked like good fun but we were happy to watch from the sidelines.

We decided to make a stop in Murchison for the night. At the campsite they had cabins, cottages and regular camping fare. We felt we deserved a bit of a treat after all those nights sleeping in the van, so Stu booked us in to one of their luxury rural cottages. It's so nice, and is a welcome change to the van. We have a full kitchen, sofa, dining table and chairs, TV, heating and even electric blankets - what more do you want? We spotted some emus in the field just past our cottage, as well as some cows and sheep. It's really quiet here and tempting to stay longer. The crazy thing is that we're paying the same for a night in here as we did for a night in the Travelodge in Australia - and this is better than your average hotel room by far. A welcome evening of luxury!

One thing we have noticed since being in New Zealand is the occasional siren, sounding a lot like an air raid warning! We heard it a couple of times in Te Anau and a couple of times this evening. We wondered whether it could be an earthquake tremor warning or something similar, but the receptionist here advised us that it's a siren used to alert the fire brigade of an emergency. As a lot of rural areas rely on volunteers to make up their fire service, the siren is used to call them in.