Back To The Hobo Lifestyle 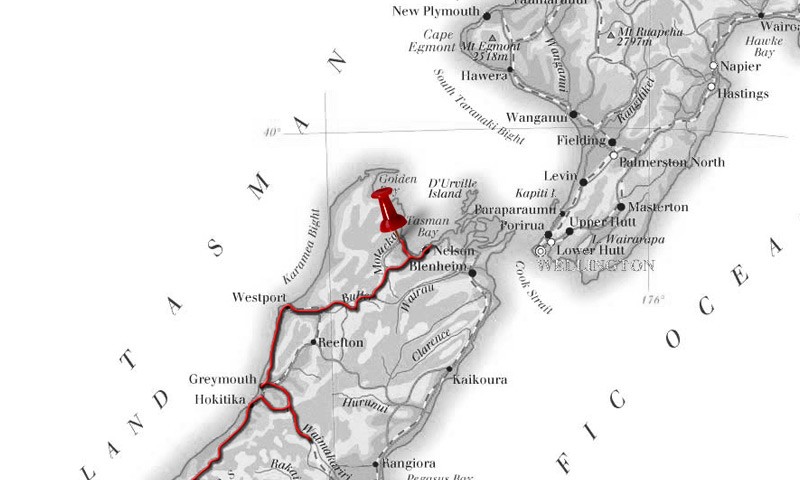 We had a lovely night in our rural cottage. We watched a bit of TV, had a lovely meal, some great wine and more importantly a comfy night sleep in a proper bed - with electric blankets! It was really good and worth the extra cost to a normal campsite pitch, even if it was just for one night. We woke this morning feeling really refreshed, and it helped having an extra late checkout meaning we could savour a bit of time over breakfast.

Back to reality... we took to van once more and began heading north-east, with Nelson on the north coast being our intended destination. We stopped at Hope Saddle Lookout just after leaving Murchison which gave a great view out over the Southern Alps. As usual there was some cloud so it wasn't a completely clear view, but you could see the iced peaks.

Once we arrived in Nelson we parked the van up near the city centre and took a leisurely walk around. Firstly we headed up to the cathedral and unusual modern looking bell tower at the top of Trafalgar Street. It was rather small in comparison to most cathedrals we've seen, but the bell tower was interesting.

We took a stroll down the high street. You could do some good shopping here. I don't think a visit to a city would be complete without popping in a camera shop for Stu! Luckily he didn't buy another expensive lens, just some cleaning tissues.

There were plenty of places to eat and drink and we decided to stop for a snack in a bar along Trafalgar Street. It's annoying that I can't remember the name of the place now as they did the most superb potato wedges.

After we'd seen all we wanted of the city centre we returned to the van and took a drive west from here and further up the coast. Nelson had a lovely coastline, and also some great weather. Apparently it's one of the sunniest spots in New Zealand, and it certainly showed it today. It made a lovely change from the wet weather of the last few days.

We decided to stop in Motueka for the night and so found a decent campsite here. Stu felt the desire to dabble with some programming - I think he must be having withdrawal symptoms - so I nipped over to the TV room at the campsite and caught an episode of The Simpsons and Family Guy. Good timing!

The wet weather made a return once we were at the campsite, but it didn't matter once we were settled in the van.