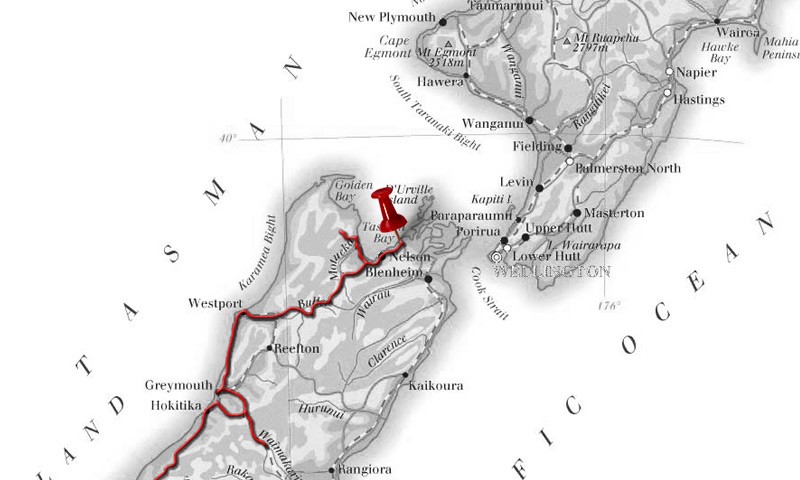 With a nice bright start to the day we headed off a bit further west towards Abel Tasman National Park. This was a really nice drive, with lots of it up and down winding roads - which I do enjoy! There were plenty of forested areas on the hills around here, it was quite attractive.

We took the route to the national park through the town of Marahau first. This took us past Tasman Bay, with some lovely lookouts over the water, but the better route was through the town of Kaiteriteri. This was a nice looking little town with a couple of good lookouts across the bay and beyond. There were some water sports on offer in the bay, and we saw some people kayaking and rubber tubing. We thought this was a great spot for some lunch so popped into a nice place facing the coast called The Shoreline. It seemed a really decent place and the food was great, but it continues to amaze me how cheap things are over here. I opted for Bangers and Mash which cost just $12. This works out to be just under �5, yet the food was delicious and there was plenty of it. I think I would be hard pushed to find the same meal for that price in Bristol, even in a local pub. The weird thing is, it's like this everywhere in New Zealand. I can honestly say that every time we've had drinks or eaten out over here the price has always been reasonable, usually quite cheap, yet we are yet to be disappointed.

After a great lunch we had to do a bit of backtracking on our journey. This road does continue a bit further west along the coast but then it just comes to a stop. To prevent to much more backtracking we decided to head back. Our last destination on the south island will be Picton on the far north-east coast. We wanted to start to make a gradual journey over in that direction as we'll be taking that ferry trip in the next few days or so.

Just as we passed back through Motueka we had to make a brief stop. Yesterday we had noticed that one of our headlight lenses had been hit by a stone and had smashed a hole. A guy had overtaken us the other day on a recently resurfaced road and it had chucked a few stones up at the van as he zoomed past at a ridiculous speed. We thought we had gotten away it without any damage, but spotted the damage as we parked up in Nelson yesterday. Thankfully, Stu had done some enquiring and it turned out that it shouldn't be too much hassle to get replaced. We wanted to get it done ourselves as the terms of our insurance mean that any damage to the van and they take $1500 off our credit card and then reimburse the amount which wasn't needed. We didn't really fancy that idea, and as we managed to get the whole job done in about 10 minutes for just $20 I think we made the right decision. What a bargain! We were getting ready to pay at least $50.

Just a little east past Nelson we took a short turning towards Cable Bay. This was a great spot and a really attractive little bay. There were a few people about, but it was very quiet - with just the sound of the waves lapping the stony shoreline. We had seen a small campsite just back from the bay and thought this would be a great spot for the night. It's lovely and quiet, surrounded by some fantastic rolling hills and some cute lambs opposite us in the next field. The sun has been out all day today so it's been really pleasant. Hopefully the good weather will hold out a bit longer.