Last Day On The South Island 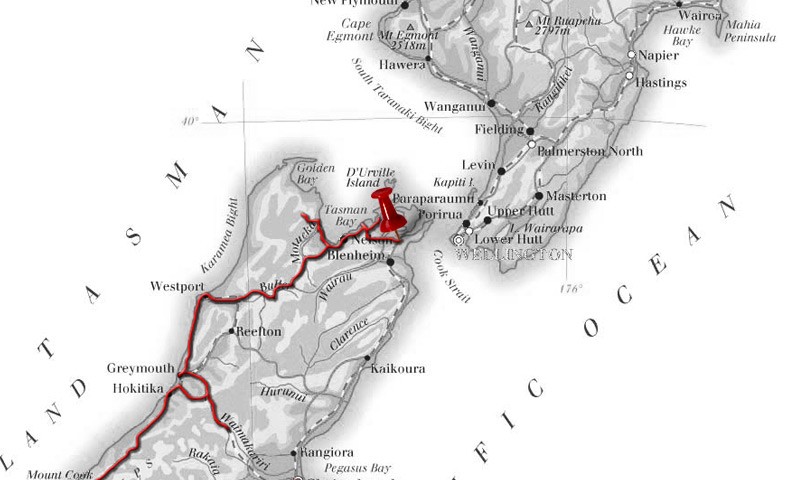 Stu got up very early this morning to capture the spectacular sunrise. I did have a quick look and the sky was glowing red, but I must confess I just went straight back to sleep!

It was a really warm and sunny start to the day so we decided to drive towards the Marlborough Sounds. As we took the turning there was a comprehensive sign detailing all the possible routes. We wanted to see as much as possible so decided to follow the route to French Pass as it would take us most of the way through the area.

There was a lot of winding roads which made it quite slow going. Whilst there were a couple of nice lookouts, most of the time the scenery was obscured from view because of the many trees lining the road.

Finally, when we arrived at the main turning for French Pass it turned into gravel road for another 22km. Gravel roads are not usually a problem, when they're short, but we didn't really want to risk driving along one that was 22km, plus the return trip. You can never predict the condition of the road. It was a bit of a shame, but we decided at this point to just head back. We stopped at a couple more lookouts we had missed, including a nice little spot at Okiwi Bay. What we did see of Marlborough Sound seemed quite attractive, but you cannot help but compare to Milford Sound which was stunning. It was still a nice trip, just a shame we didn't see more of it.

Back on the main highway we found ourselves driving through the Rai Valley, so decided to stop here for some lunch and supplies. We found a great little shop which seemed to sell everything anyone could need - hot food, drinks, cakes, crisps, ice-cream, postcards, crayons, sunglasses, artist's paintbrushes, tennis balls and much more. Bizarre!

Further along the main highway was a turning for the Queen Charlotte Sound. Taking this route we were a lot happier than at the Marlborough Sound as there were plenty of lookouts the whole way around. The road, whilst still quite winding, wasn't as slow going as before which made it much more pleasant. It was also good to know that we didn't have to drive back the same route afterwards as the road eventually lead us to Picton.

Once in Picton we quickly found a campsite for the night and got on the internet to book our tickets for the ferry journey tomorrow across the Cook Strait to the North Island. This section of water crosses what is known as the 'Roring Forties', apparently the most dangerous waters in the world! So, looking forward to that! Seriously though, although the conditions can be very changeable they tend to be OK and without incident, and this journey is supposedly one of the most beautiful ferry rides in the world too. As the web tickets are the cheapest we decided to upgrade them to 'Kaitaki Plus'. This means that we get access to the comfortable lounge with free sky TV, internet, complimentary drinks and food etc.

We are both looking forward to it!