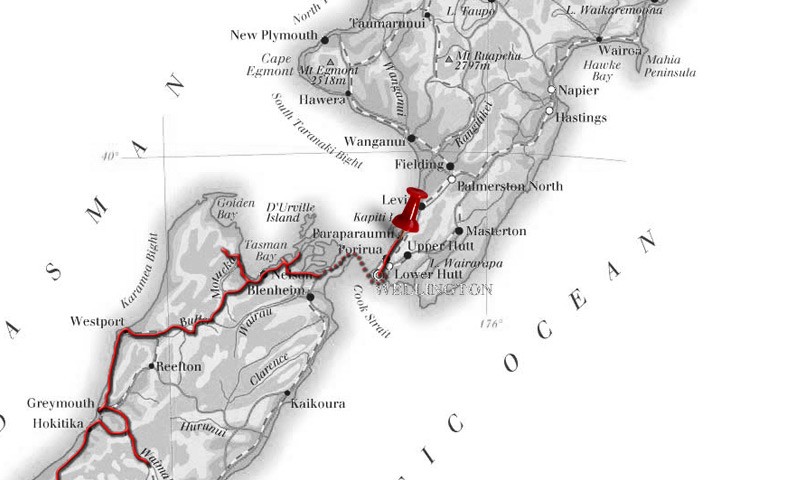 We drove back into the city of Wellington this morning and found a place to park up the van. Luckily, being Sunday, it was free parking so we were able to explore the city without a time limit. We were also very fortunate with the weather. Our guide book advised us that Wellington is one of the windiest cities in the world due to it's location which acts as a wind tunnel for the constant westerly breezes from the Cook Strait. However, there was barely any wind and not a cloud in the sky, so it was a lovely, warm, sunny day.

Our first destination was the Parliament Building, an impressive granite construction set next to a round building known affectionately as 'The Beehive'; a rather strange shaped building which looked a little dated. They offered free tours inside so we thought we'd join one of them.

The tour lasted an hour and took us around the main areas, including the House of Representatives. This room, with an obvious resemblance to the lower chamber of the House of Commons, was a lot smaller than I expected. Many of the rooms and corridors have a much older feel than the Parliament building in Canberra, more similarities to the Houses of Parliament in London. The only downside was that no photography was allowed and we had to check-in all our bags and camera equipment in the cloak room.

Just down the road from Parliament is the old Government Building, an impressive sight if only for the fact that it is actually made entirely of wood.

We headed a little further up this road away from the town to see Old St.Pauls - the original Cathedral of the city prior to being replaced by a bigger building (hence the 'Old' title.) Apparently this older building was originally set to be demolished, but it was saved by the government after a campaign from local people. This is once again a wooden structure which looks fairly modest from the outside, but inside takes on a unique look and feel, quite unlike any church I've ever seen before. The dark wood looks really attractive. We were welcomed into the church by a guy who happened to live in Clifton, Bristol for 25 years - what a small world!

We took a stroll to the harbour side and found somewhere nice for lunch. The food was fine but we were not sure about the music - they played the entire 'Best of Michael Jackson' catalogue back-to-back. Once we'd finished lunch and 'Heal The World' started playing we made a swift exit!

A walk further around the harbour side took us to Te Papa Tongarewa, or The Museum of New Zealand. This turned out to be a great place to visit, and you could certainly see the appeal for children. The exhibits ranged from Maori culture, to the early European settlers, to earthquakes, to a colossal squid! It was very well presented with a lot of interactive exhibits and modern technology to play with. You could easily spend an entire day here if you had the time.

After visiting the museum we walked back along the harbour side, just in time to watch a street performer do his final juggling fire routine. We then headed up to catch the Cable Car. This takes you up a very steep incline towards the Botanic Gardens. The ride takes several minutes and there is a great view of the city at the top. We took a little walk around the gardens, finding an interesting sundial in the grounds. As time was getting on we decided to take our trip back down the hill and then return to the van to find a camp site.

We've really enjoyed our day out in Wellington. It's a nice city, but what makes it nicer is that it didn't feel crowded. The view of all the buildings in the city may not be extremely attractive, but the views out along the harbour make up for that.

We decided to try and find a different camp site for tonight as we didn't like the idea of listening to a gang of kids shouting all evening. We took a drive out of the city again but this time a little further in a place called Paekakariki. Our camp site is located in the heart of the QE2 Park and is lovely and quiet.