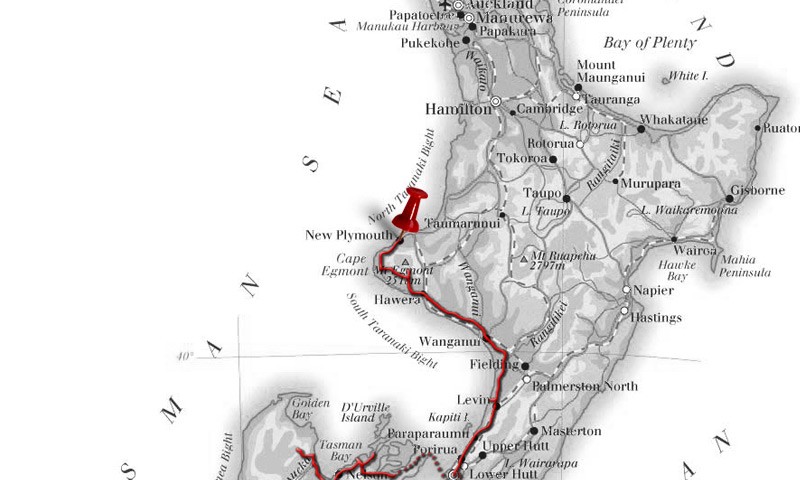 Before leaving Wanganui we drove to a couple of lookouts over the town, the best of these being at the Durie Elevator. Whilst the elevator itself did provide some steps to climb up, the best view was at the top of the memorial tower adjacent to it. It was 176 steps to the top, which was a bit of an effort first thing in the morning, but well worth it for the views.

We left Wanganui and made our way towards New Plymouth, orbiting the impressive Mount Egmont, or Taranaki as it's known to the Maori. We spotted the mountain a little way off, and could see its snow covered peak appearing above the clouds. It was an awesome sight.

We took a detour off our route towards Dawson Falls. This led us into the Mount Egmont National Park. However, even though today was clear and sunny, once we got closer to the peak the surrounding cloud blocked all view of the summit. We took a short walk to the falls though which were very nice, and also saw a good lookout there. From here you could very faintly make out the South Island in the distance.

We drove back from our detour and continued around Mount Egmont, the cloud having now increased significantly so only the base was now visible. We drove through Opunake which is the surf town around here. There are a few surf beaches and we stopped briefly at a lookout near one of these along the coast.

Once we arrived in New Plymouth we booked our campsite for the night, then headed out for a bite to eat. Upon our return someone else had parked in our spot! We weren't amused but there was nobody in the van so nothing that reception could do. Never mind, we found another spot and settled down for the night.