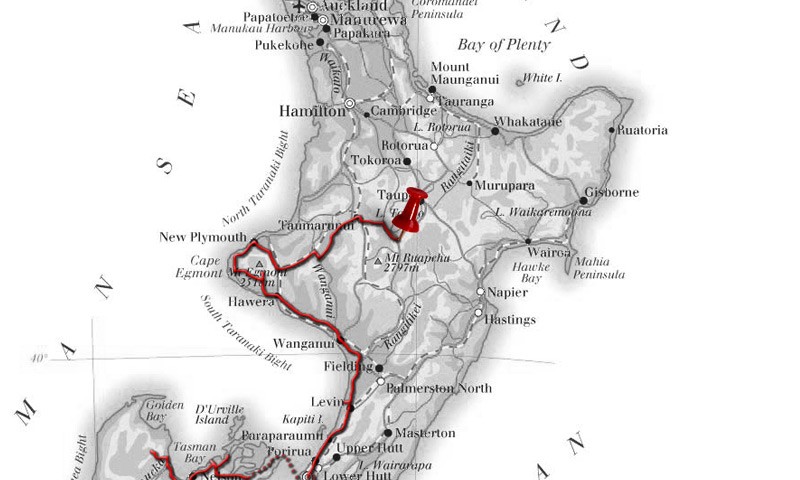 We headed east today in the direction of Lake Taupo. Although this didn't look too far on the map, and in fairness wasn't a massive drive in comparison to some of our drives while in Australia, it took us the best part of the day.

We drove through some lovely countryside, and there were a couple of nice spots to stop and take pictures. However, the route consisted of a lot of very slow roads, mainly because they tended to be very winding and hilly. Also, one section of this road turned to a gravel road for around 16km which really slowed things up. It was at this point that we took a break for a bite to eat and a quick power nap. Stu and I were both feeling very tired today after a poor nights sleep, and this seemed the perfect place to take a bit of a rest. It was a perfectly quiet spot, and the entire time we stopped there we only saw one other car drive past.

As we approached Turangi we had a great view of Lake Taupo. The lake itself is absolutely huge and it was nice to drive around as we came closer to the town.

Although it was a bit cloudier today it was not cold, and when the sun did poke through it felt quite hot. It would have been a great day if we both didn't feel so tired, and typical that it was on a day when we ended up doing quite a long drive! I think we've discovered that the van we've hired in New Zealand is great for a couple of weeks and then it starts to feel a bit uncomfortable. It's not as big as the van we had in Australia and the bed is quite hard and small. In fact, we felt we deserved a better nights sleep tonight so checked into a motel once we arrived in the town. The price was even cheaper than the last cabin we'd stayed in at a campsite. We have to say that the standard was very good. Just as nice and comfortable as a decent hotel. It was certainly needed and it was a great to have a night out of the van again.