The Sun Has Returned 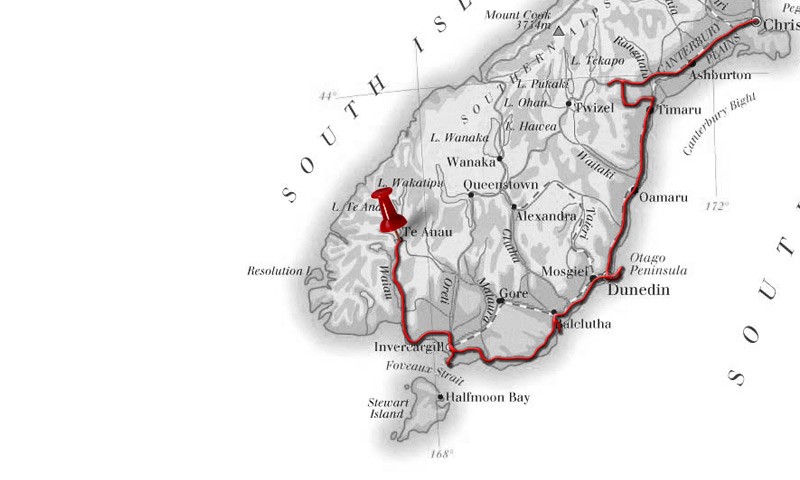 It was a much clearer and drier start to the day today. We decided to take the minor road up to Te Anau as we can take the major route when we make our way back to Queenstown. It was a good choice as the scenery was spectacular. The mountains we saw along the way were unbelievable, some even with iced caps. It rained on and off as we drove along but it didn't spoil anything.

We stopped at a few lookouts along the way. Firstly, at McCrackens Rest, which had a lookout over the ocean. It was still a bit cold and windy so we didn't stop here for too long. A bit further along we came across the Clifden Suspension Bridge. It was a little smaller than Brunel's creation in Bristol, it has to be said, but worth a stop. As we left here we spotted mountains approaching on both sides of us.

We stopped for lunch by the Waiau River to admire yet more amazing scenery and for Stu to take more photos. We stopped at Manapouri a little further on. The visitor centre here had some useful information about the Fiordland and cruises. We shall probably take a cruise when we get to Milford Sound, and the prices weren't as steep as we'd expected. Whilst we were here we parked up by Manapouri Lake - the Maori translation of the name meaning 'Lake of many islands'. This was a really attractive lake with mountains rising up majestically on all sides. We'll let the pictures speak for themselves as it's getting a bit tricky thinking of superlatives and adjectives to describe all of the scenery! It was around this time that the weather cleared up, the clouds parted, and we actually got some warm sunshine.

We carried on to Te Anau and stopped at the lake. The weather had become lovely and warm by now, it's amazing how much it has changed since this morning. We decided to get a camp site in Te Anau by the lake for tonight. The drive to Milford Sound takes around 2.5 hours and I'm sure Stu will be asking for me to stop every 5 minutes to take photos! It could be a long drive!

While we were driving around the Te Anau lake we noticed a helipad on the water. As this is one of the most scenic areas in New Zealand we decided to book a trip for tomorrow. We should be flying over some amazing areas of the Fiordland that we wouldn't otherwise see just in the van, so we can't wait for that! This should include a number of Middle Earth locations used in Lord Of The Rings.

Stu decided to book himself an hour in the camp site spa. He found the spa to be dirty and when he attempted to put water over the sauna coals the light bulb smashed! The only good thing he got out of it all was his refund! Oh well...

We seem to have arrived at this camp site on the same day as most of Germany. I guess we weren't to know they were planning another invasion!

We are both very excited about our helicopter trip tomorrow!