Did Someone Have Eggs For Breakfast? 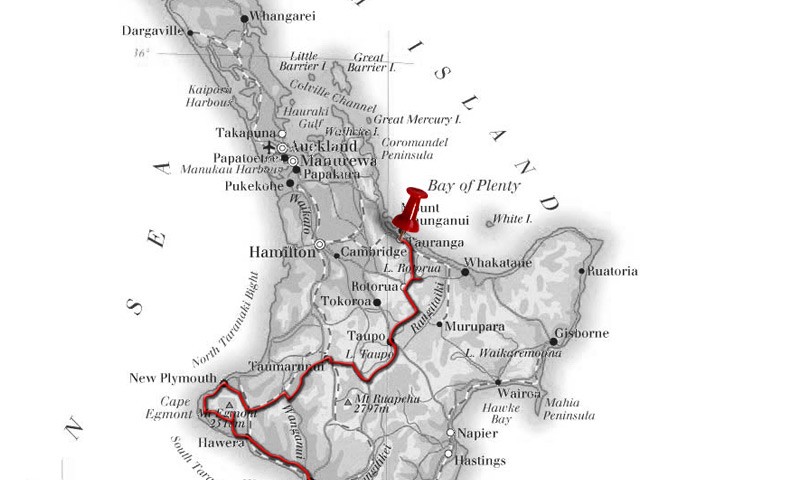 We awoke this morning to the strange smell of rotten eggs permeating around the apartment. It wasn't Stu's Delhi-belly, we realised that Rotorua does have the faint smell of hydrogen sulphide which is emitted from the many geysers in and around the town. We could smell it faintly when we arrived yesterday afternoon, but it seemed a little stronger this morning.

We drove just south of Rotorua this morning to visit Waiotapu Thermal Wonderland. The first thing to visit here is the Lady Knox Geyser. This geyser erupts at 10:15am every day, set off deliberatley by adding soap to the bubbling hot water spring. We missed the start of the eruption by a few minutes, but it lasts for around an hour so we still got to see the water spurting into the air.

When you enter the main park there is a large area to walk around which will take you a least an hour. There were some great things to see and it was well worth the visit. One of the great highlights was the Artist's Palette which is a huge pool consisting of sections which are different colours because of the different minerals which are brought to the surface. Also, the 'Champagne Pool' which contains the largest spring in the region, being 65m in diameter and 62m deep was a real highlight. This pool was formed 700 years ago by a hydrothermal eruption, and just under the surface and around the ledge you can see the minerals which are slowly being deposited there and building up. Apparently these minerals are, amongst others, gold, silver, mercury, sulphur and arsenic.

It was a really warm day today, but combined with the steam from the many geysers it actually felt quite humid walking around the area. We grabbed some lunch at the cafe here once we had finished our walk around the park. Just outside the park there was a fantastic mud pool with some very active areas spurting out blobs of boiling hot mud.

We drove out to the north of Rotoru to visit Hells Gate. This is another park containing many boiling lakes, craters and steam holes, but it was still worth a visit as the pools were all different to each other, and to those in the other parks we had visited. A few of the bubbling pools here, including the name of the park itself, had actually been named by George Bernard Shaw when he visited the area in the early 1900's. The highlights here were Kakahi Falls - the largest hot waterfall in the southern hemisphere, the mud volcano - a 2.4m high mud volcano which regularly erupts mud, usually at night, and the steaming cliffs - this is the hottest pool in the park emitting vast amounts of steam due to the 122 degree Celsius surface temperature. It was an interesting walk around the park, and finished off at the end by a free Maori wood carving activity. You could pick an image to attempt to carve into a piece of wood. I think I attempted a piece that was a bit too adventurous, but it was a bit of fun and we got it varnished at the end to make it look a bit better.

We decided to drive up to Tauranga, found somewhere in the town to park and took a walk around the town. It was a great town actually, plenty of shops and some nice looking bars and restaurants along the waterside. Stu found a camera shop (big surprise) and decided to buy himself a flash for his camera.

We headed down to an Italian restaurant by the water to grab a bite to eat. It was a lovely meal and unbelieveable that we both had three courses and a couple of glasses of wine and the whole thing cost just $105 - thats around �40! I can't think of anywhere in Bristol where you could get a bad meal that was that cheap, let alone a decent restaurant.

After a great meal Stu suggested another stay in a motel tonight. Seeing as they are relatively inexpensive here and we still have some money to burn before we go back to the UK, how could I refuse? We found a nice comfy motel in Tauranga and settled down to another relaxing evening.