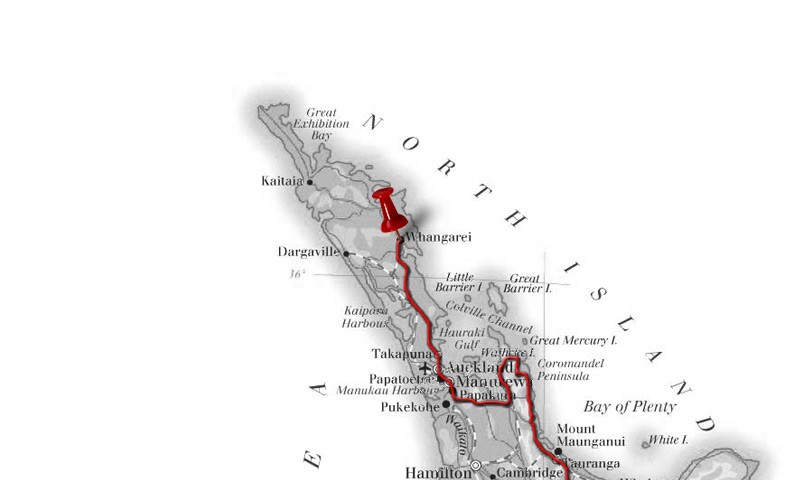 We slept OK in the van last night, apart from being woken in the early hours when some guys decided to have a BBQ! Thankfully, it didn't last long and we soon got back to sleep.

In the morning we drove out of the town to stop at a lookout we had missed on the way in. It rewarded us with a great view over the peninsula and out to sea. There really is some lovely scenery around here, and it continued as we left Coromandel Town and continued our way around the peninsula and heading up to Auckland. The road became very coastal at one point and really reminded us of the Great Ocean Road in Victoria, Australia.

We eventually reached Auckland but it was not our intention to stop here today. We will be flying out of Auckland when we leave to go back to the UK in a few days time, so we decided to bypass the city for now and make our way to the Northland first. We can pay Auckland city a visit on the way back down. On the brief glipse we did get of the city it did remind us of Sydney in many ways - the bridge going over the harbour, the extremely tall tower in the city centre - although it's very obvious that it's a lot smaller than Sydney, as we would have expected. Plus we drove in and then out the other side of the city in just a few minutes, and this wouldn't have been possible in Sydney. It looked an attractive city so we look forward to seeing it on our way back.

Just past Auckland we were advised by the signage that we were approaching a toll road. It only costs a couple of dollars each way but they don't have any toll booths. Therefore, if you want to pay by cash you need to stop at the service station before the toll road and use a machine to pay there, or you can call or access the website and pay there too. We stopped off and it seems we'd picked the time when everyone else had stopped to pay too, as Stu said there were about 50 people in the queue when he went there. We decided not to bother and had a bite to eat here instead. Luckily, by the time we'd finished lunch most of the other cars had gone and the queue had disappeared, so we managed to pay the toll in cash after all. While Stu was in the queue, a guy told him that there was actually another road which takes you to the Northland which isn't a toll road. However, he advised us to take the toll road route as the other way is slow going. Ordinarily if we had all the time in the world we would probably take the free and more scenic road, but as we only have a few days left now we have to be a bit more efficient with our time.

Considering we did take the toll road, I wouldn't say that it was a boring drive. There was still some attractive countryside to see, it was just that we were driving on a three lane motorway for a lot of it, instead of a small and winding country road. It felt a bit strange at first, after all this time of driving on small roads in New Zealand - even the major highways are only a maximum of two lanes - to now suddenly being on a motorway again. It certainly was becoming clear that the Auckland area is an exception to the rest of the country.

We had made it to Whangarei, our intended destination for today, so we new we were going to have a bit of long drive again today. We figured that this way we make sure we make it to the far north, and if we miss anything along the way we can always see it on the way back down to Auckland.

When we finally made it to Whangarei we made a brief stop to get some bits for dinner first. Stu nipped out to get a few bits while I waited in the van. It was quite amusing when he returned a few minutes later asking me to fetch his passport, as he was trying to buy some beers in the store and the girl who served him said she didn't think he looked over 25 years old. When Stu finally came back with the shopping she said the girl looked a bit shame-faced when she saw the passport and realised that he was a few months shy of 30! I did laugh!

We found a decent campsite, and although it wasn't too late we thought that we'd done enough driving for one day and we'd made some good distance. It was just time for a last load of washing to be done - I don't think it would be fair to leave it all for my mum when I get back home ;)