A Real Kiwi At Last 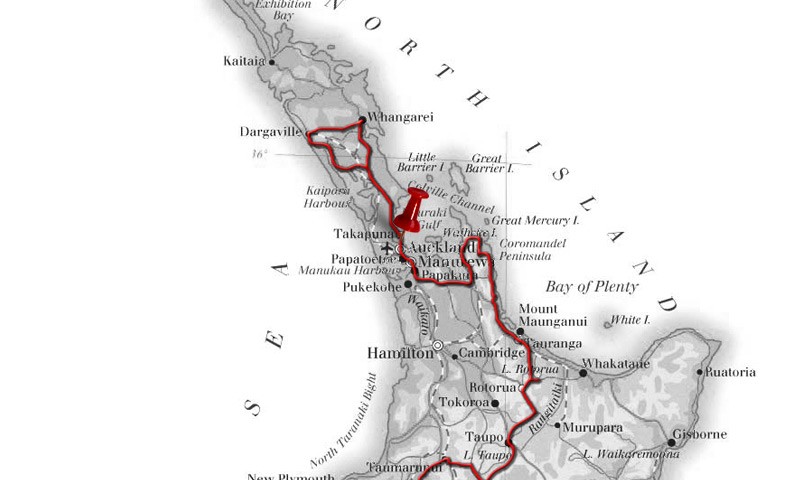 What started yesterday as a bit of an achy neck, manifested this morning as a neck which I can't turn properly without it hurting! I think the combination of driving nearly every day for the last four months, plus probably sleeping awkwardly (is there any other way to sleep in a small campervan?) must have caused it. Actually, I did sleep very well last night so not really sure how it came about. After a hot shower this morning it loosened up a little, and got a little better throughout the day. Hopefully it won't last until the plane journey on Thursday.

When we got up this morning we noticed that the weather had changed a bit. It had obviously been raining, and there was still a little rain in the air. Bit of a change from the nearly non-stop warm and sunny weather we've been having pretty much since arriving on the north island. It was nothing too serious though, and we left the campsite in Whangarei this morning and headed up to the Kiwi House and Museum just outside the centre of town.

We arrived at the Kiwi House just as the sun came out and the rain stopped. The entry fee was only $10 each to go to the Kiwi House, and this also allowed us entry to the Gecko House next door, the museum, as well as the rest of the heritage park which surrounded it so was very good value. The Kiwi House itself was very dark, this is to simulate the night time so that the Kiwi will be awake and active - being a nocturnal bird. It was great to finally see a real Kiwi, after seeing lots of pictures and models in various places. The only downside was that we couldn't use flash photography, which basically meant that we couldn't take any pictures inside the kiwi house. The reason being, quite obviously, that a flash would frighten the birds. Of course, we understood completely and respected the rule, but of course it was too dark to take pictures without a flash so unfortunately we don't have any pictures of the real thing.

The kiwi in this enclosure - a north island brown kiwi - was very active foraging for food. It was nice to see that he had lots of room to roam around in. The guy who ran the placed advised us that the reason there was only one kiwi in this enclosure was that they tend to fight when put together. There was a native New Zealand owl in the enclosure with him, so he wasn't completely alone.

After the Kiwi House we took a look around the rest of the heritage park. We spotted one of the tiny forest geckos in the gecko house. He looked very cute and small, we couldn't spot the other one, he must have been hiding.

Next we headed over to the Clarke Family Homestead. This was a homestead built for Dr Clarke and his family in 1886, and still displays the original interior and family treasures, complete with clothes and old photographs. Just outside of the house is what is believed to be the smallest chapel in New Zealand (possibly even the world), the Oruaiti Chapel built in 1861. This is unusual, not only because of its size, but because it is octagonal in shape as built from just a single Kauri log. Also around here was an old women's jail c1900 which was very small indeed, it couldn't possibly have housed more than two prisoners by my reckoning.

A old railway track separates this area from the museum just a couple of minutes away, so we headed up there. The museum had two sections. Downstairs were various displays from early New Zealand settlers including some Maori treasures. Upstairs focused upon the Treaty of Waitangi which was signed in 1840 by the United Kingdom and the United Tribes of New Zealand. It gave details about the terms of the treaty, how these came under question and how the terms were broken almost immediately. It was a good museum with some really interesting displays. This proved to be a great stop and great value for money.

We took a drive to the Whangarei Falls. These are 25m high falls with a couple of different areas to view them from. The best being at the base of the falls which were an easy walk down some steps. We grabbed some lunch in Whangarei, before taking a drive out to Dargaville. We decided that with the limited time we have left in New Zealand it probably wouldn't be practical to go any further north if we want to see anything of Auckland. If we had unlimited time then things might be different, but we decided to head over to Dargaville, and then take the route back down to Auckland so we'll get a whole day to see the city properly. Plus I think that four months on the road is really taking it's toll, so even if we did have the time to fit it all in, I'm not sure we'd have the energy!

The drive over to Dargaville was really nice; the countryside in the north is really lovely. We had to back track a little as we were returning to Auckland via the same toll road we'd taken on the way up - another time saver. There were a couple of lookouts we stopped for along the way, but we decided to head straight down, taking in the beautiful scenery as we went. Then we stopped a little short of the city centre on the Northcote Road turnoff and found ourselves a motel. This will mean we can get into the city fairly swiftly tomorrow and do some exploring, without too much rushing about.