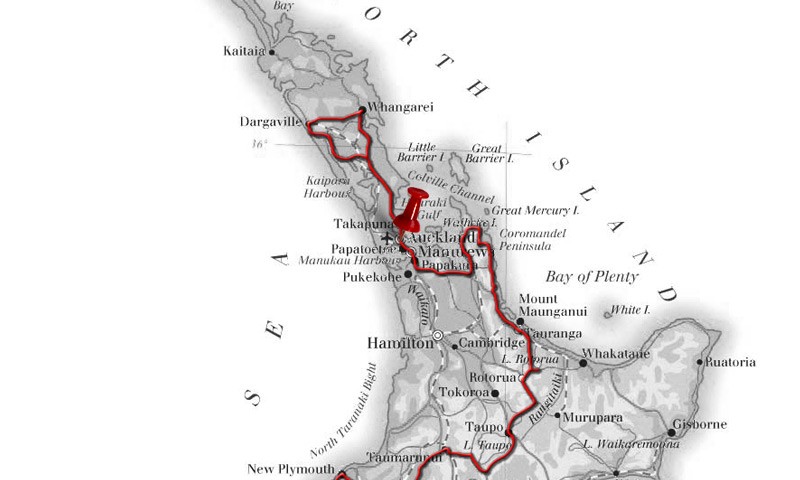 After a comfortable night sleep and a hot shower this morning my neck was feeling a lot better. I'm glad it didn't last too long. We drove into Auckland CBD today with the intention of parking up and having a wander around. We probably should have guessed that parking in the city would not be that easy. Actually, there were a lot of spaces but usually with a maximum stay of 90 minutes. After driving around the same roads for fifteen minutes or so we decided to make do with this. We could always come back and renew our ticket.

The thing that struck us immediately about Auckland city was how clean it seemed, a lot like Sydney. However, it's clearly not as big or busy as Sydney. We also liked the fact that at major crossroad junctions the traffic lights favour the pedestrians - as it should be. The green man appears at the same time on all sides so you can actually cross diagonally. Such a good idea as it's so time consuming crossing major roads in the city.

Walking from where we had parked the van we crossed through Albert Park towards the main CBD area. We decided to visit the Sky Tower, which stands dominant over the city at 328m - the tallest building in the southern hemisphere. The entry to the tower including the Sky Deck - the highest viewing platform within the tower - is normally $28 each. The woman at the counter asked if we were backpackers. We told her we were travelling around New Zealand but not really backpackers. She said we looked like backpackers and gave us the discount anyway! We must have obviously looked a bit grubby today, but it worked out OK as we only had to pay $36 for the both of us. Bargain.

The Sky Tower itself was very impressive. In the lift taking you up to the main viewing level there is a glass panelled floor and windows with views over the city. This was a cool idea as it gave you some perspective as to how high you were ascending. Something which the Sky Tower in Sydney could have benefited from as you don't see anything on the way up as there are no windows at all. Once at the top you get the panoramic views of the city and as today was a bright and sunny day it was really clear and you could see for miles. There was a video being played here showing the building of the tower, and ocassionally we saw someone doing the Sky Tower jump, which meant them hurling themselves off the tower just above us and falling down to bottom, just attached by a couple of wires along the sides. Looked like good fun! This level also had some glass panels in the floor, which despite not being frightened of heights still gives you a strange feeling when you walk across it, seeing the floor hundreds of metres below.

After enjoying the views here we then went up the shuttle lift to the Sky Deck. The left takes you up several more levels to get even higher and better views. This level is also smaller so you can get a better panoramic perspective of the view. Just down some stairs is the cafe, so we decided to grab a bite to eat here as an early lunch before we had to return to the car to renew our ticket. When we got back to the van though we decided against renewing and instead drove to the Auckland Museum just on the outskirts of the CBD.

The museum states that entry is free although a $5 donation is suggested. There is also charges for certain exhibitions within the museum if you want to partake. It's quite interesting that although the entry fee is stated as an optional donation, when we went to the front desk to get our tickets we were told "that will be $10 please". Although I'm sure you'd have the right to say you don't wish to donate, it was done in a way which would make you feel a bit awkward if you did it. Not that I'm complaining about the donation, as I'm sure we would have made one, but it seemed a little weird to me. Either it's compulsory or it's not.

Entry 'donations' aside, the museum itself was very well laid out and really interesting. The ground level was dedicated to the 'People of the Pacific' and contained a vast array of Maori artefacts, as well as from other cultures of the Pacific. There were some fantastic canoes and other structures with amazing and intricate wood carvings. The first floor was entitled 'Natural History: Other Worlds' and had exhibits based around New Zealand's unique environment. This included sections on the birds, animals and insects found here, dinosaurs, volcanoes and earthquakes. There was even an exhibit which was based around the scenario of what would happen if an earthquake erupted in the city of Auckland. Not the most optimistic thing to watch, but was interesting. It basically involved sitting down is what appears to be a normal living room which a news flash comes on the television. Then suddenly you see the volcano erupting outside your window in the middle of the harbour around Auckland and the whole room shakes. An effective and eye-opening exhibit. They explain outside that although the chances of this happening within our lifetime are slim, it could happen. Also, if it does happen it would probably occur with very little warning!

After a few hours in the museum we took a drive to Parnell, just down the road from the museum really. This seemed to us like the Clifton of Auckland. The main road was full of fancy looking cafes, restaurants and boutique style shops. It had a nice feel about it. After a walk down the main street we decided to get some early dinner, and found a nice Italian restaurant. The food was superb and although the area had similarities to Clifton in Bristol, price certainly wasn't one of them.

Heading back to the van we decided that for our last proper night in New Zealand (we fly out at 1am Thursday morning) we would stay in a motel again. Well, actually we found a decent hotel just a couple of minutes drive from Parnell. We're staying almost in the centre of Auckland and the place is still cheap. From our room we even have a view of the city centre with the Sky Tower in the middle.