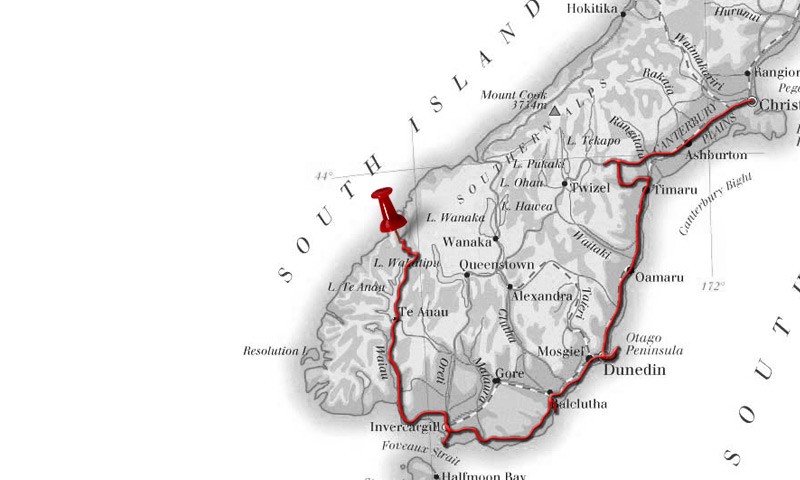 Today has been the most photographically rewarding of the entire trip so far, so be warned as there are lot of images to look at!

It was another fresh start to the morning. The sun was shining brightly which helped take some of the edge off of the cool breeze. We were both really excited about our imminent helicopter ride. It looked a little hazy outside with some low level cloud and I was originally concerned about the quality of the shots I'd be able to take.

We arrived at the helipad and met our pilot, Rod, who assured us that the weather was perfect and that he was confident I'd get some good pictures. We then buckled up and took off on our flight.

The flight was really enjoyable and the scenery was fantastic! The low level clouds really added to the pictures and reinforced just how tall some of these peaks are. We had intended on a flight path out to Dusky and Doubtful Sound, but time was a bit short and coupled with taking the door off for photography it might get too cold. Nevertheless, Rod did a great job of orbiting around the particular points of interest. Some of the peaks were incredible and your mind is cast back to watching Lord Of Rings - after all, this is where Middle Earth was shot.

I swapped from my 24-70 to 10-22mm around 1/3rd of the way into the flight as the 24mm just wasn't wide enough to capture the shots properly. I'm now starting to feel a bit smug for picking up that lens for a bargain price in Melbourne! Super wide-angle lenses are not wide enough for aerial photography!

After the flight we started off on our journey up to Milford Sound. Our travel book warned us that despite only being a 120km trip it can take several hours as there are a lot of photo opportunities and lookouts along the way. They are not wrong.

We stopped at a number of places enroute, including Eglinton River, Eglinton Valley and Lake Gunn. We stopped for lunch, surrounded by towering mountains and it was totally silent apart from birds and bees flying around. Amazing.

Just before you reach Milford Sound you drive through the Homer Tunnel, a 1km bare-faced tunnel through the side of a mountain! Not for the faint of heart driver that's for sure. The traffic lights alternate every 15 minutes to allow for the traffic to make it's way through - reminds me of some of the traffic lights in central Sydney!

On arrival in Milford Sound we booked a camp site (just in time, they only had 2 places left) and our cruise for tomorrow. I took a walk along the river and snapped a few more photos before returning to the van to discover I'd taken nearly 14GB of pictures in a single day! Still, better to have taken too many than not enough I think. We also figured out why the two places left were close to the river - we were attacked by swarms of sand flies at dusk. It wasn't very nice but it didn't last that long.

It's really hard to describe just how beautiful and unspoiled this area of the world is and I'm quite jealous that New Zealanders have all of this in their back garden.