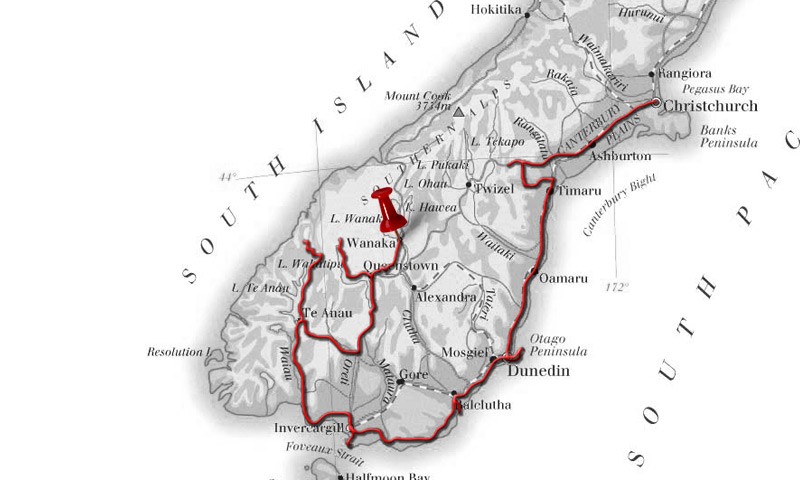 The campsite in Queenstown was very handy being right next to the town centre. However, whilst was fairly big, they packed people in pretty tight. Each site was quite small so you are parked very close to the vans either side of you. Most campsites we've stayed in tend to have a bit more space outside your van. Also, being right near town it's a great opportunity for people to hit the bars in the evening then come back to the camp site in the early hours, with no concept of keeping the noise down. Thankfully it was nothing too rowdy but enough for us to not want to stay another night, particularly as it would be Friday night (I sound old!).

As we left in the morning we could see that the early low level cloud was still very present amongst the mountains. It looked quite spectacular.

We took a drive out to Glenorchy which follows the Wakatipu Lake to the north. It's amazing just how big this lake is, as the drive to Glenorchy is around 45km from Queenstown, near where the lake comes to an end. The drive to Glenorchy offered yet more spectacular scenery. Although the day had started bright, along the drive we encountered a bit more cloud and some drizzle. This meant that at one stage as we approached the part of the lake where Pig and Pigeon islands were we saw a beautiful rainbow as the sun shone through the cloud. The rainbow appeared to be in the middle of the lake just arching over Pigeon Island, it looked stunning and you could see the whole thing. The rest of the drive continued with the fantastic mountains and was a great winding road to drive along. Stu said it felt like a rollercoaster ride, maybe that's just my driving!.

Glenorchy is the end of the road, so we headed back towards Queenstown once again. We spotted a waterfall on the way back we hadn't noticed on the way out. We parked right up to the river at its base. It was flowing down a crack in the mountain and the water then flowed into a small river cascading over rocks, it was really pretty.

We didn't stop too long in Queenstown, just to refuel and get some shopping. Then we took a drive north heading towards Wanaka. This firstly took us through the small village of Arrowtown with some nice old buildings; it looked a very sweet little place. We then decided to take the alpine route on the Crown Range Road instead of the main highway. I'm glad we did as it took us uphill along a zigzag road which ascended over 450m in 3km. Our van did struggle a little with some of the steeper sections, but it was well worth it. The lookouts over Arrowtown and even back towards Queenstown in the distance were amazing. It was a relief to finally have some downhill driving after this though!

Once in Wanaka we parked up at the lake here, and then decided to take a short drive through the town then find our camp site. We had quite a bit of drizzle this afternoon, so hopefully we'll get some better shots tomorrow.