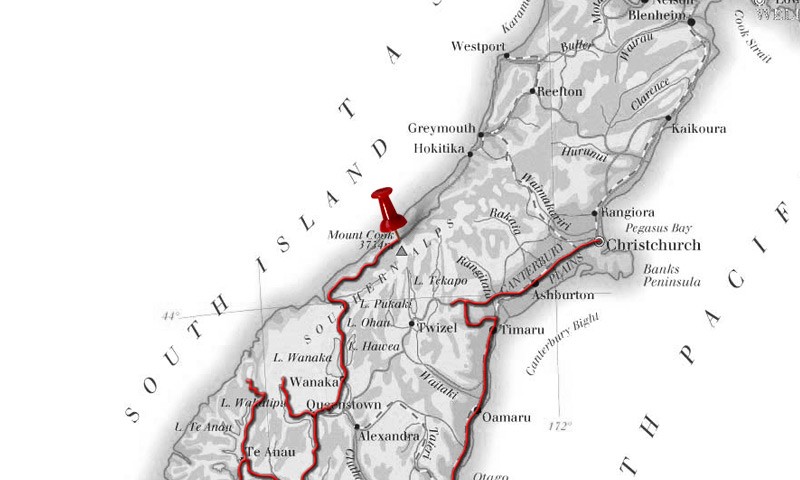 The day started off clear and sunny in Wanaka. We paid a visit to Stuart Landsborough's Puzzling World in the town. The adverts in our book made it seem quite amusing. It's basically a place full of illusion rooms and puzzles topped off with a maze. We decided against doing the maze, but the rest of it was good fun. There was a room which looked normal, but you appeared large in one corner and smaller in the other - an Ames Room. Another good one was the slanted room (the pictures probably tell it better.) They also had some good holographic pictures, as well as some Roman style toilets which were quite amusing, so it was an entertaining way to spend an hour.

We left Wanaka with the intention of heading up towards the West coast. There were some great jagged topped mountains just as we left, and once we made it to Lake Hawea there were some more great views. The drive took us around Lake Hawea, and it was another enjoyable drive of twists and turns with some superb lookout points. Unfortunately, the further along we got the more the sun became hidden by the clouds until it eventually began to drizzle. We also had spots of heavier rain, but it didn't spoil the views too much. We stopped for lunch at a little campsite along the way beside the lake.

Our drive took us along the Haast Pass, which connects Otago to Westland along the Haast River. There were some fantastic mountain views once again. I think the rain also contributed to there being some great waterfalls too, some of them being really big and coming from very high up the mountain sides. The Gates of Haast is where the bridge takes you over the raging river, which looked pretty mean - I wouldn't want to slip into that! Then a little further on was Thunder Creek Falls, another fantastically tall waterfall coming down the mountain side. These sights were all really easy to see and didn't require much, if any, walking from the van. Which was good really as the rain did get fairly heavy at times.

Once at the actual town of Haast we decided to press on a bit further. The town itself, unlike the route to it, didn't have much to offer and as we still had some time left to the day we decided to head on to Fox Glacier. This took us along part of the west coast, and there was a good lookout point called Knight's Point which looked out to sea and at some rocks which had eroded from the edge of the cliffs. It looked pretty rough out there though, and we didn't stay too long because of the sandflies. We've encountered this little blighters now and again, and their can be really irritating. They do bite you, although it's nothing like as bad as a mozzie, but because they are small they just get everywhere.

There was some lovely dense forest to be seen on the way to Fox Glacier, the colour probably brought out even better by the wet weather.

Once at Fox Glacier we grabbed the nearest campsite for the night and had the nearest thing to a roast dinner we would have for many months - bought roast chicken, mash, veggies and gravy - delicious! We look forward to taking a look at the Fox Glacier itself tomorrow.