Don't Let The Kea Near The Van 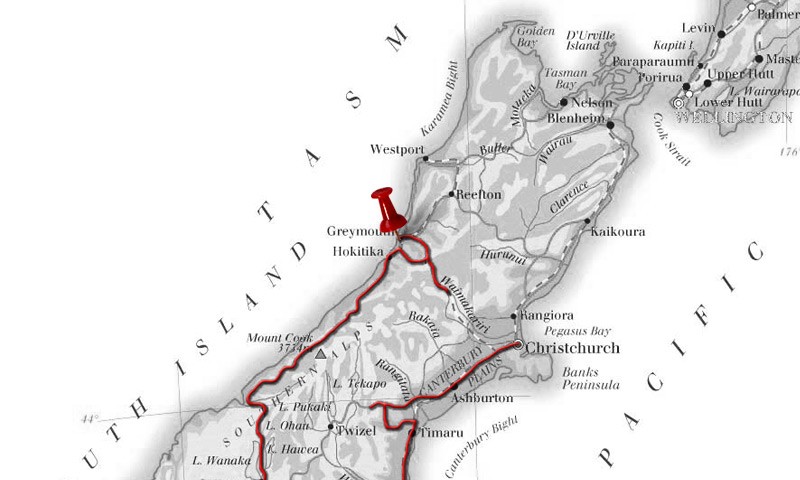 It was a cold night last night, and also a cold start to the morning. I guess that's what you get for parking so close to a glacier! We did get another clear view of the top of the Franz Josef Glacier this morning.

As we drove further along the west coast from Franz Josef we encountered what was probably the least interesting scenery in New Zealand so far. That's not to say that it wasn't nice, it's just that it lacked the huge hills and mountains that we have been used to. The countryside was still pretty, if less dramatic.

We stopped briefly in Hokitika to get some supplies, and continued on towards Arthur's Pass. This is the main route across the Southern Alps, connecting the east and west coasts of the South Island. It's named after Arthur Dobson who had been told of the pass by the local Maori and got to work making a route for horses and a railway. We didn't want to take the route all the way back to Christchurch of course, but we decided to head a far as Arthur's Pass which is more or less midway through the route to the other coast.

Arthur's Pass saw the return of some fantastic scenery. Although it started to rain heavy when we stopped at a rest point early on for lunch, it cleared up for most of our journey which made visibility much better. Our drive took us through the Otira Gorge, which involved a fairly steep ascent and some very winding roads. The scenery was great through the gorge however, so we're glad we pushed our van hard to make it to the top. Along this road we saw plenty of little waterfalls at the side of the mountains and at one stage there was a rock shelter which had been built over the road. I'm not sure whether I should be reassured by that or not!

There was a lookout near the top called, rather ominously, Deaths Corner. It proved to be a great stop though as we had a superb view back down the gorge, including the road which had just driven along to get up here. The stop was topped off by seeing a few of New Zealand's alpine parrot - the Kea. They are a lot bigger than I had previously thought, more like the size of a cockatoo. They have a very attractive green colouring with scarlet feathers under their wings. They also seem to like attacking cars, as we saw one biting away at the window wipers of the car parked next to us. Stu got some nice pictures, and we chose to leave once one of the birds started biting at something under our van! We're really glad we saw the parrots as we'd been hoping to spot one for a while.

Once we arrived at Arthur's Pass village we took a break for coffee. There was a nice cafe/restaurant with a sofa by an open fire which seemed the perfect place to rest. It also had free wi-fi so a good chance to check emails too!

Feeling refreshed we drove back the way we had come through the gorge once again, but just taking a slightly different route after the start of the gorge via Lake Brunner and on to Greymouth. As time was getting on and the weather started to turn wet once again we decided to get a camp site here.

We were both feeling quite tired this afternoon, so we decided to close the curtains and get a couple of hours sleep. This was disturbed unfortunately by some nice person banging on the door of our van. We ignored them at first but they continued banging. It turned out that we had left the van lights on, so I guess they were trying to be helpful. I don't think I would go knocking on someone's van if their curtains were closed though - it's not really camping etiquette!

The weather for the rest of the day was pretty awful; it rained pretty heavy on and off till we went to sleep and was fairly windy too. Still, at least we were in the dry comfort of the van and had spag-bol to keep us warm!