We had a good nights sleep at the Echo Point Motel followed by a hearty breakfast. The plan for our second day was to visit the Jenolan Caves, located South-West of Katoomba. The Jenolan Caves are a series of limestone caves dated as over 400 million years old. They are one of the largest and oldest cave systems in the world. They are also the sister caves of the Cheddar Gorge Caves near Bristol, UK.

The drive from Katoomba took us a couple of hours, including stops at various lookouts along the way.

One of these lookouts was Govetts Leap near the town of Blackheath. 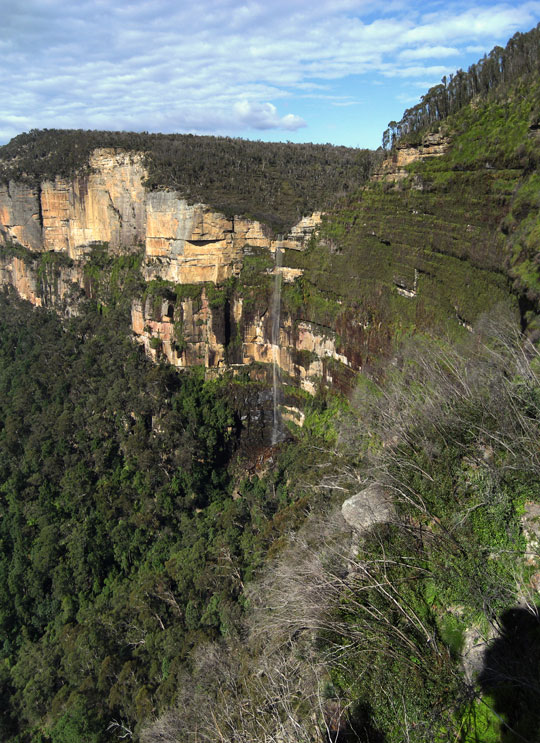 We also enjoyed views across the Grose Valley. We didn't really have the time to do one of the trail walks, although we wandered down the edge of the cliff to get the best views across the valley and mountains. Again, a spectacular sight!

It was a very pleasant drive through miles of scenic countryside, so the time it took to get to the caves didn’t really register.

We knew we were getting close when the road began to descend and wind around cliff edges. This was the time to drive carefully as the road isn't very wide and it's a sheer drop over the edge! We stopped off for a quick photo opportunity at Mount Inspiration on our journey down. 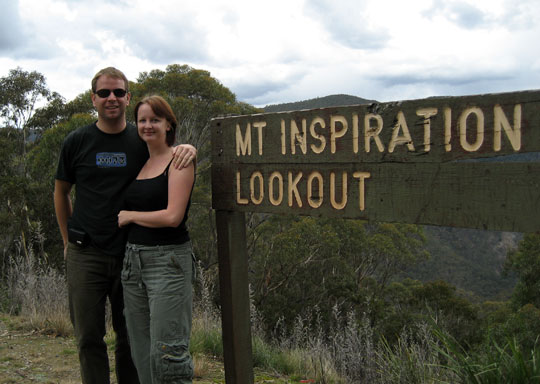 Once at the caves, you drive through the Great Arch to get to the car park. No problem for our small Toyota, but I wouldn't like to drive a motor home through. It's a bit of a squeeze and there are scratch marks on the rocks to prove it! 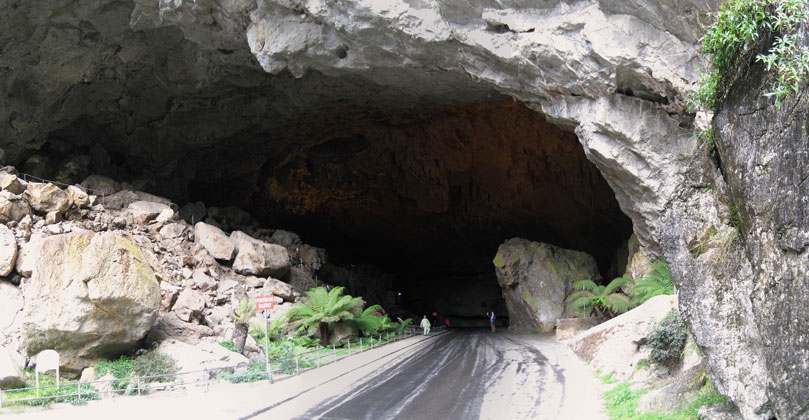 The first job was to eat our packed lunch and then pick which cave we wanted to see. There are around 9 tours to choose from and they all include a local guide. After a glance at the choice, we decided upon the River Cave.

It proved to be a good choice! The guided tour took approximately 2 hours and it was a fantastic experience. It was amazing to think there are actually around 300 other cave systems down here. 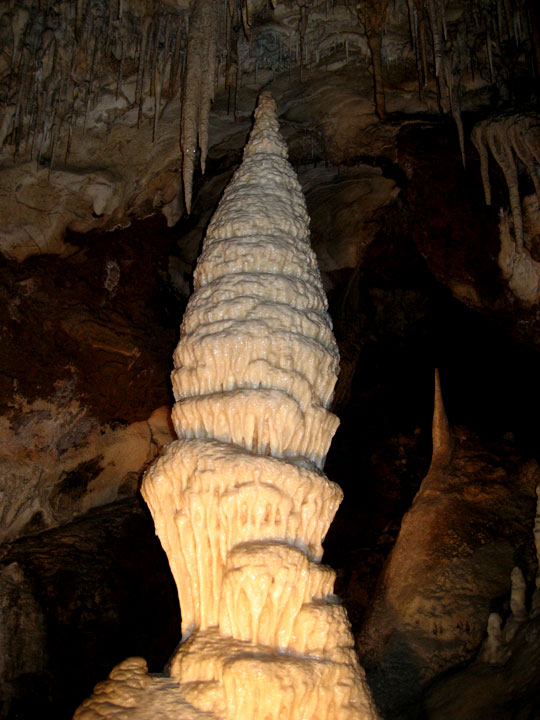 The river inside the cave was beautiful, and some of the limestone structures inside the cave were spectacular. It’s amazing to think that these formations are millions of years old and how little they have changed in all that time. Navigating the caves was fairly easy; there were a series of carved steps, slopes and ladders. Nevertheless you appreciate the effort made by the first explorers who discovered them by candlelight! 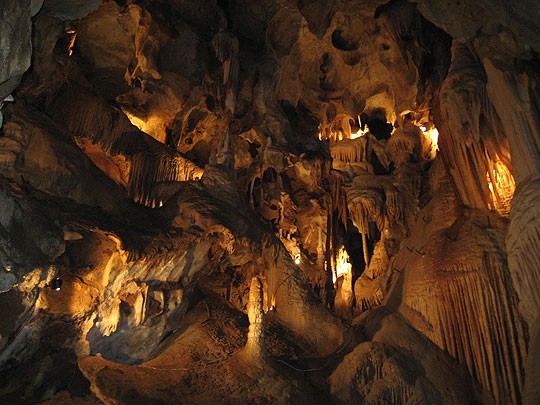 At the end of our tour, we were shown where the river leaves the cave. The sun reflects the mineral deposits in the river giving it a brilliant turquoise colour. We were told that the Platypus could be spotted on the riverbank from time to time, but we weren't lucky enough to spot one. It’s proving to be quite elusive!

After our tour, we stopped at the café for coffee and cake. It would have been nice to see more of the caves, but we faced a long journey home and were running short of time. If we come back to the Blue Mountains region again, we'd definitely take another cave tour. The light rain created an area of mist around the tops of the hills and mountains which looked quite beautiful. During the drive home we spotted wild kangaroos leaping through the countryside. 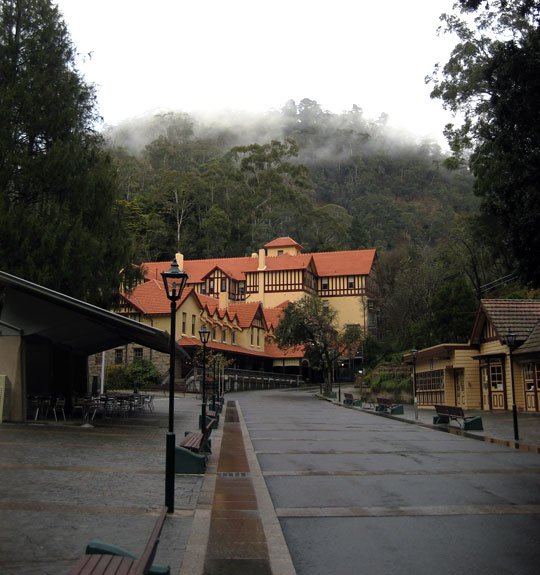 After a busy few days in the mountains, we decided to look around our local area a bit more. We drove through Manly towards the North Head. We were rewarded with some good views - a different perspective over the harbour towards the CBD. We could see what looked like a storm brewing down the south coast near Coogee.

We then drove towards Dee Why beach and stopped for fish and chips. We explored some of the many rock pools along the coast. Further on from Dee Why, we drove up to Collaroy and had a short stroll along the beach. Then we decided to head back after a fairly relaxed day. 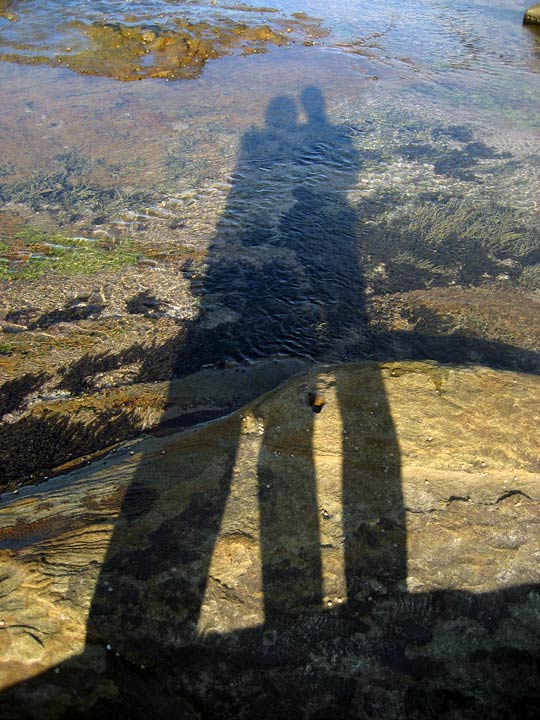 The next day was our last day with the car, so we decided on a trip to the iconic Bondi Beach. It's quite long and very wide - I imagine it would be heaving with people during summer. There are plenty of places to eat and drink along the front. We stopped for lunch then took a stroll along the warm beach.

After some time at Bondi, we took a scenic route home via Watsons Bay. There were a couple of places to stop, with some great views over the harbour. Again, it offered us another perspective over towards the CBD. We could even see Manly's North Head where we'd been the previous day.

On the journey home we heard on the radio that migrating whales had been spotted in the harbour. Apparently it's quite rare to catch them this close to Sydney and Manly. Sadly, we heard the news a little late to spot them. It has been great having the car and the freedom it brings. I think we are going to miss it!

The plan for the evening was to meet up with an old school friend, Steve MacDonald, who has been living in Australia for a few years. We had got in touch via Facebook a while back and have been trying to arrange meeting up since we arrived. He'd invited us to a fundraising event at the Burdekin Hotel bar in Darlinghurst that he'd organised with a friend. It was nice to meet up with him and to meet his friends. It was a fun end to an interesting and busy week. 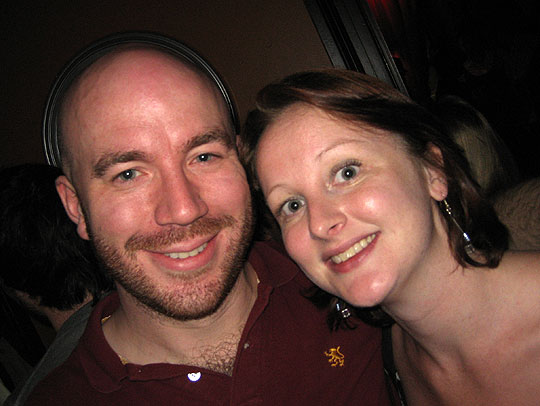 We have now had over 3 months of being lazy tourists. Unfortunately the time has come to start becoming responsible adults again and to start looking for work. We both intend to work over the winter months to help refill the coffers, and will then embark on an adventure around Australia! We have decided to rent a motor home for our last 3 months and do a tour. We've bought a book which gives some great advice about driving and camping in Australia. We did consider buying a van, but it seems like a lot of hassle for just a few months. Besides, if we rent one it should be a fairly new model that isn’t going to break down in the middle of the desert (anyone seen 'Wolf Creek'?!).

(PS. A few people have asked - Stu creates the panoramas using PT Gui. He recommends it.)