On Top Of Japan 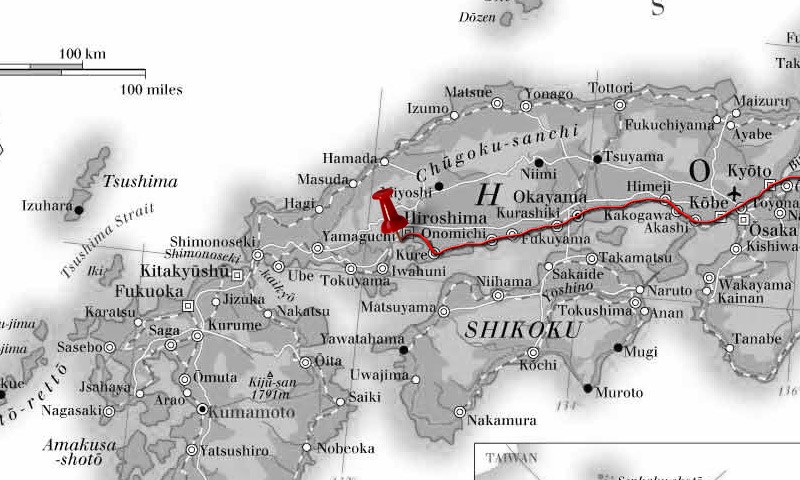 I woke up this morning before Stu and left him in bed while I went down to get breakfast, which was included in our stay in the hotel. It was a Japanese style buffet and was fairly good. There was a selection of scrambled egg, salad, potato, fish, miso soup, rice, toast, juice and coffee.

When we were packing up the room and getting ready to check out, Stu realised that he had wiped his camera memory card before copying all of the pictures to his computer! It was a frustrating few minutes while he checked to see if he could salvage anything, and we were worried that all our photos from yesterday in Hiroshima would be lost. However, he thought he might be able to recover them and so has been running some recovery software. (This evening Stu discovered that he had actually saved all his photos to a different folder and hadn't deleted them! All that worry for nothing!). (Stu note: a worrying display of IT muppetry). After checking out we took the walk to our next hotel, thankfully only a ten minute walk away. We knew we wouldn't be able to check in as it was still early morning, but they look our baggage for us and would hold it until we returned.

We headed to the train station and caught the Sanyo line train headed for Miyajimaguchi; a twenty minute journey away. Whilst on the train an old man sat in front of us and started to chat, asking Stu about his laptop and his GPS device. His English wasn't great, but I think we understood most of what he was saying. His English was still a lot better than our Japanese! (Stu note: he was wearing a beret which I kindly tilted into a 'French style' for him. He seemed really pleased and left it crooked for the rest of the journey!)

Once at Miyajimaguchi, we took the ferry over to the island of Miyajima. The ferry is part of the JR network, so we could use our rail passes for this too! The ferry afforded us wonderful views across the sea. It was a beautiful clear day by the time we arrived, although the air was still cold in the shade.

The first sight after disembarking is the O-torii Gate, which is the gate to the Itsukushima Shrine. It is just over 16 metres high and is the eighth gate since the Heian period (this one was built in 1875). Like the shrine itself, the gate is built just off the shore and therefore stands in the water. Miyajima has been worshipped as a divine island since ancient times; this is the reason for building the shrine on the seashore where the tide ebbs and flows. Our guide book advises that the best time to see the gate is at high tide, as this is when it looks it's best and appears to float on the water. We arrived just at the right time then!

The Itsukushima Shrine itself is known for it's unique construction, and was first built in 593 - though remodelled into it's present structure in 1168. Apparently the vermilion colour of the shrine and gate is considered to keep evil spirits away.

We had a walk around the shrine, where there were also masses of Japanese people doing what appeared to be some Tai Chi in the grounds of the shrine too - great to watch.

There are lots of wild deer which walk all around the island. They seem very passive and don't cause any problems. It looked as though some of them had had their horns filed down though - my assumption is to protect people, but doesn't seem very fair.

We took a walk through the town, stopping briefly to sample some Momiji manju (speciality cakes of the area filled with sweet red bean paste). Very tasty. You could see the cake making mechanism at work through the shop window which was quite interesting!

We headed over to the ropeway (cable car) which takes you up to Mount Misen. It's not a cheap journey (1800 yen each) but it is a really enjoyable ride on the cable car up to the transfer station. From there you aboard a much larger cable car which fits around fifteen people which takes you to the station 450 metres above sea level. There are some amazing views here over Miyajima, so we decided to stop here and grab some lunch - udon noodles with beef.

After some refreshment we took the walking path which leads to the Mt Misen observatory at the summit, some 535 metres above sea level. It's a real effort, up many steps, but we were rewarded with fantastic

panoramic views once we reached the summit. Miyajima is rated as one of the top three most scenic places in all of Japan, and we can certainly see why.

After taking in all the views we took the steps back down to the cable car station, and got both the cable cars back down. We shared our cable car with two Japanese ladies, one of them was quite chatty and was interested to know where we were from and what we thought of Japan. She also asked us what our favourite Japanese food was - a question I remember the school kids asking us yesterday in Hiroshima. They obviously want to know what people think of their food! She was very friendly though, and wished us a happy trip.

We walked past the Itsukushima shrine once again. By now the tide had gone out and the water was no longer surrounding the shrine. Just past the shrine is a five story high pagoda, an amazing structure and the subject of multiple photos from Stu.

It had been a great day in Miyajima, a place we are really glad we visited. But it was also a tiring day, as there was lots of walking - particularly all the steps to the observatory.

We headed back to the port and took the ferry back to Miyajimaguchi, then the train back to Hiroshima. We bought some food for dinner at the supermarket, and the guy serving Stu told him he had won a prize. He gave Stu the chance to pick a few cards from a box - but we have no idea what these were as it was all in Japanese. Then he said we had won a gift, and gave us a bottle of lemon juice and some chewing gums. Always nice to get something for free I suppose!

Then we got back to the hotel and checked into our hotel for the night. Our room here is a lot bigger than our hotel room last night. The carpet looks like it hasn't been replaced since they dropped the bomb(!) but other than that it is fine. It's also a lot quieter as it's further away from the train station.

Our plan tomorrow is to get the Shinkansen to Osaka. We fly from Osaka to Beijing on the morning of 13th, so we figured it's time to make our way there tomorrow and have a look around before we have to leave Japan.