Sir, The Window Is Wired 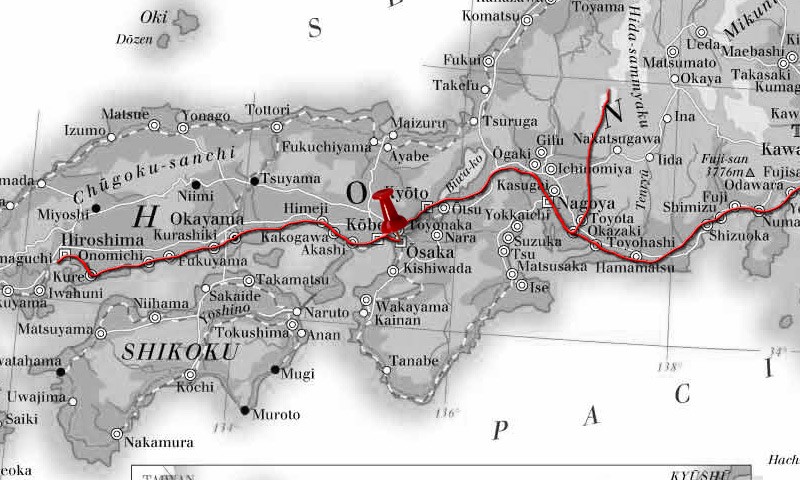 This morning we checked out of our hotel, grabbed some breakfast from the bakery down the road, then headed to the train station to catch the Shinkansen to Osaka. There are always cars allocated to passengers who have not made a reservation, but this morning there was a big queue for the non-reserved cars. This meant that when we got on the train, Stu was unable to get a seat at first. This wasn't helped by the fact that some bloody American woman barged into a seat that I was clearly trying to hold for Stu. However, she got up to go to the toilet later on and some

old lady took her seat - karma if you will! Stu managed to get a seat after the first stop though.

The train arrived at Shin-Osaka station around ninety minutes after leaving Hiroshima, basically the 'new' out of town station for Osaka built for the Shinkansen. To get to Osaka station meant changing to another train for a journey of just a few minutes.

Once at Osaka station we had planned to walk to our hotel, as when we had booked it we noticed it was just a few minutes walk from the station. However, Stu didn't have the address of the hotel or a map of the location saved to his laptop or iPad, so we had to jump in a taxi to get to the hotel.

The hotel we are staying in seems very nice. Our room is on the 20th floor, and has an amazing view of the city. The room itself is also very spacious, particularly for a Japanese hotel room (they are usually fairly small by standard). It has a huge living space and a nice size bathroom, with separate shower and bath. The only other place we have stayed which had this was the Hyatt Regency in Kyoto.

Stu was feeling particularly tired, so he grabbed a half hour power nap. Then we decided to head out and grab some lunch.

Just a couple of minutes walk from our hotel is the Umeda Sky Building - a dramatic piece of architecture which our Lonely Planet guide describes as "a space age version of Paris' Arc De Triomphe". It certainly is a very strange looking building, and I can't yet work out whether I like it or not. It is amazing, but attractive? Perhaps not.

The Umeda Sky Building does have some observation areas, so we may return later tonight when we can view the city lights from the top. There is an underground passage below the Umeda Sky Building which is full of lots of little caves and restaurants. It all looks quite cute, and something to bear in mind for another time.

Next we headed for the subway station to catch a ride to the south side of the city. Unfortunatley, just as we had bought our ticket they decided to close the line we were about to use. A guy who spoke English advised us that apparently there had been a accident so they had closed this line. This meant we had to take a ten minute walk though the subway station to catch a different line to our destination.

Just a few stops on the subway brought us out at Namba. Here there were lots of people around, obviously attracted here by the endless shops and eateries. We started to walk down one of the shopping malls and it appeared to just go on forever - this would definitely be a shoppers paradise (if it wasn't for the huge crowds of people I suppose!) There are lots of tall buildings around here with huge advertising signs. As darkness fell you can see that the place really comes alive and the neon signs lit up.

We had a good walk around, and then stopped briefly to get a bite to eat. I decided on some chicken skewers and some tuna and sea bream sushi. It was very nice, although the sea bream was a little tougher than I'd expected. It also didn't fill me up at all, so we had to stop at a shop later on to get some more food.

As it was getting dark now and we were both feeling tired we decided to get the subway back to Osaka station, then walk back to our hotel (via the supermarket).

I decided to do some washing as this would probably be our last chance before we fly to Beijing on Saturday - and then who knows when we shall get to do washing after that?!

Stu decided to take some night shots of the view from our window. He wanted to open the window, but this required unscrewing a piece of plastic holding the handle closed. It was quite clear that they don't want you to do this (which is why it's screwed down!) So several minutes later we get a knock at the door from one of the staff asking us to close the window, as it is wired. Thanks Stu! (He did get some cracking shots though!). (Stu note: always worth risking a bit of trouble in the name of art).

Tomorrow will be our last full day in Japan as we fly at 10am the following day. We have decided to spend our last day in Nara, which is just under an hour away from Osaka, and there should be plenty there to fill our last day.